Baramhat 9 : The Departure of St. Konan and the Martyrdom of Sts. Abrianus, Amrata his wife, Eusebius, Armanius, and the Forty Martyrs.

1. The Departure of St. Konan.

On this day the fighter St. Konan departed. This Saint was from a city called Antanyos in the country of Syria during the days when the Apostles were preaching the Name of the Lord Christ to Whome is the glory. His father's name was Nestor, his mother's name was Theodora, and they worshipped the stars. When this Saint grew and became a man, the virtues of purity, chastity, piety, and mercy were manifested in his life.

His parents wished to wed him but he refused. They forced him to get married, but he refused to have any relation with his wife and both remained virgins. Often he prayed saying: " O God lead me to Your true Knowledge." Michael, the angel of the Lord appeared to him and ordered him to go to one of the apostles. Konan went to him, learned from him all the Laws of the Christian Faith, was baptized and received the Divine Mysteries. He went on listening to the teachings of the Apostles and he increased in purity, chastity, ascetism, and praying. God granted him the gift of performing miracles and the authority over the devil, and he attracted his parents to the faith in the Lord Christ.

Once, one of the unbelievers went to one of the temples to offer a sacrifice to satan. St. Konan knew this man, and he cried out against satan, rebuked him and commanded him to confess before the people telling them whom he was. The devil confessed that he was satan and was not a god. All the people were present cried out saying: "One is the God of St. Konan," and they believed and were baptized.

When the Governor, who had been appointed by Claudius Caesar, heard about this Saint, he had him brought before him, and the saint confessed his faith in the Lord Christ. The Governor commanded him to be bound and beaten very severely. When the people of the city heard that, and because of their love to the Saint, they wanted to kill the Governor but he fled from them. They released the Saint from his fetters, washed the blood off him, and carried him to their town. He lived for many years then departed to the Lord. The believers made his house a church and laid his body in it, from which many signs and wonders were manifested. 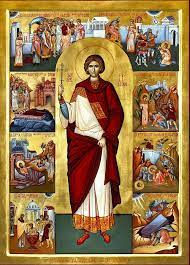 On this day also was the martyrdom of Sts. Abrianus, Amrata his wife, Eusebius, Armanius, and the Forty Martyrs after they had been tortured severely in the Name of Our Lord Jesus Christ.