Baramhat 23 : The Departure of the Great Prophet Daniel. 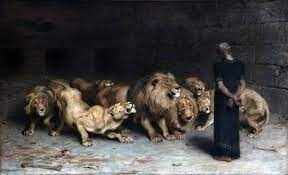 The Departure of the Great Prophet Daniel.

On this day of the last year of king Cyrus King of Babylon, the great righteous prophet Daniel Departed. This prophet was from the tribe of Judah, and from the posterity of king David. He was taken captive along with the Israelites by Nebuchadnezzar, king of Babylon when he captured Jerusalem in the year 3398 of the world. He stayed in Babylon for seventy years. This prophet was very young in age, however, he conducted himself in virtuous life, the Holy Spirit filled him and he prophesied in Babylon.

In the fourth year of the exile, Nebuchadnezzar the king saw a dreadful dream and was extremely frightened. When he woke up, he forgot the detail of his dream. He gathered all the wise men of Babylon to tell the king his dream and its meaning. If they failed to tell the king the dream and its interpretation they would all be killed, among those also were Daniel and the three young men. Daniel and the young men prayed to God with supplications to reveal to them the King's dream. God answered their prayers and revealed to Daniel the dream and its interpretation. Daniel went to the king and told him his dream and its interpretation. He also told him about the kings that they are about to rule after him, and what would happen to every one of them. Nebuchadnezzar was pleased with Daniel, and fell on his face before him. The king presented Daniel with great gifts and appointed him over the wise men of Babylon.

After some time had passed, Nebuchadnezzar saw another dream, and Daniel interpreted the dream for him. Daniel told the king that because of his arrogance, God would drive him from among men, to dwell among the beasts of the wild and would eat grass like oxen for seven years, and then God would bring him back to his kingdom, and all that happened to Nebuchadnezzar. Daniel also explained to Belshazzar, the son of Nebuchadnezzar, what the angel of the Lord had written on the wall, when king Belshazzar drank wine in the gold and silver vessels of the temple of the Lord. Daniel told the king: " O king, the Most High gave Nebuchadnezzar your father, a kingdom and majesty, glory and honor... But when his heart was lifted up in pride, he was deposed from his kingdom and thrown from his throne into among the animals. And you, Belshazzar, although you knew all what happened to your father, yet you also lifted your heart against the Lord of heaven. They brought the vessels of the house of the Lord before you, and you , your lords, wives and concubines (mistresses) drank wine from these vessels... Then the fingers of a Hand were send from the Lord, and His writing was written: "Mene, Mene, Tekel, and Upharsin..which meant:

Mene means: God has numbered your days as a king and terminated you rule. Tekel means: You have been weighed in the balances of the Lord and was found wanting. Upharsin means: your kingdom has been divided and given to the Medes and Persians after you. All of them came to pass and the king was killed with all his lords and the kingdom of the Chaldeans ended. Darius, king of Persia, ruled after him.

There was an idol in Babylon named "Bael" which king Darius worshiped. When Daniel was asked why he did not worship it, Daniel answered: "I do not worship something that has no life in it." The king said to him: "He is alive for he eats and drinks every day." Daniel told him that could not be true. The king was angry and wanted to check the matter for himself. He put the food and the drinks in the temple of the idol and closed the door and sealed it. On the next day, he went to the temple, opened the door and did not find the food nor the drinks. But Daniel with the help of some of his companions, covered the floor of the temple with fine ashes, found the feet tracks of those who entered the temple by night and stole the food and drinks.

The king arrested the seventy priests of the idol Bael, together with their wives and children and tortured them until they told him about the secret entrance to the temple. The king then ordered them all to be killed and allowed Daniel to destroy the idol and its altar. The people rebelled against the king and asked him to deliver Daniel to their hands. The king surrendered to their demands and Daniel was cast into the den of lions. However God kept Daniel safe and destroyed his enemies.

Daniel saw in a vision the kingdoms and the kings to come after him to rule the world to the end of time. He also saw the glory of God and the Divinity of Christ the Savior. He prophesied about His coming and His death, the destruction of Jerusalem, and the abolition of the sacrifice and the offerings, and all has been fulfilled.

This great prophet remained in Babylon for seventy years, then departed in peace.

May his prayers be with us, and glory be to God for ever. Amen.