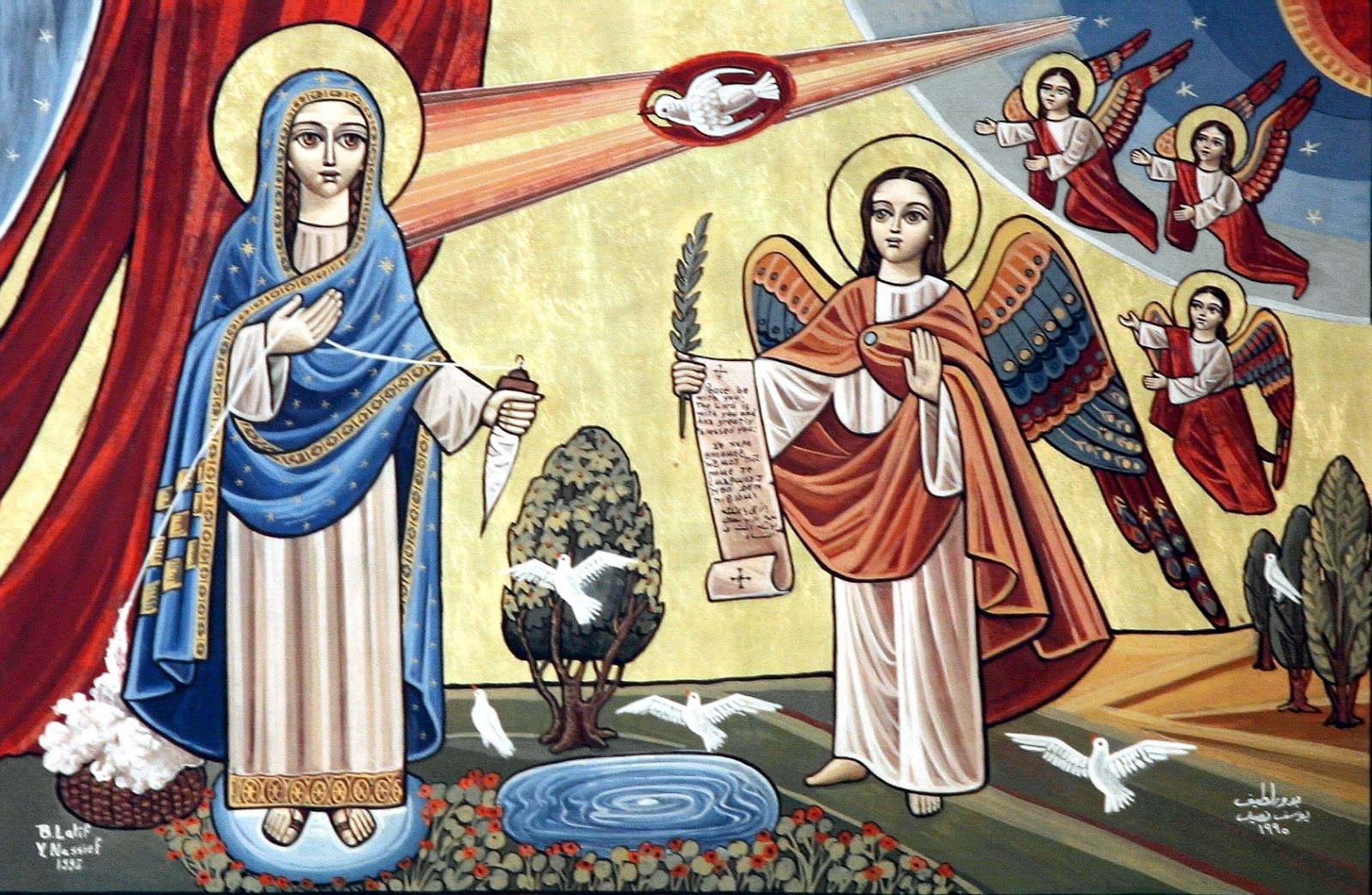 1. The Commemoration of the Life giving Annunciation.

On this day the church commemorates the Annunciation of our Lady, the Theotokos, the Virgin St. Mary. When the appointed time by God since eternity for the salvation of the human race had come, God sent Gabriel the Archangel to the Virgin St. Mary, who is from the tribe of Judah the house of king David, to announce her with the Divine conception and the Glorious Birth as the Holy Scriptures testifies: " Now in the sixth month the angel Gabriel was sent by God to a city of Galilee named Nazareth, to a virgin betrothed to a man whose name was Joseph, of the house of David. The virgin's name was Mary. And having come in, the angel said to her, "Rejoice, highly favored one, the Lord is with you; blessed are you among women!" But when she saw him, she was troubled at his saying, and considered what manner of greeting this was. Then the angel said to her, "Do not be afraid, Mary, for you have found favor with God. "And behold, you will conceive in your womb and bring forth a Son, and shall call His name JESUS. "He will be great, and will be called the Son of the Highest; and the Lord God will give Him the throne of His father David. "And He will reign over the house of Jacob forever, and of His kingdom there will be no end." Then Mary said to the angel, "How can this be, since I do not know a man?" And the angel answered and said to her, "The Holy Spirit will come upon you, and the power of the Highest will overshadow you; therefore, also, that Holy One who is to be born will be called the Son of God.
Then the angel gave her the proof of the validity of his massage: "Now indeed, Elizabeth your relative has also conceived a son in her old age; and this is now the sixth month for her who was called barren. "For with God nothing will be impossible." Then Mary said, "Behold the maidservant of the Lord! Let it be to me according to your word." And the angel departed from her. (Luke 1:26-36)
When she had accepted this Divine Annunciation, the Only Begotten Son, the Word of God, who is One of the Three eternal Persons, came and dwelt in her womb, a dwelling, the human race can not comprehend. And straightway He united with perfect humanity a complete unity inseparable and unchangeable after the unity.
This day then is the first-born of all feasts, for in it was the beginning of the salvation of the world which was fulfilled by the Holy Resurrection of our Lord, saving Adam and his offspring from the hands of Satan.
We ask Our God and Savior graciously to forgive our transgressions and excuse our sins. Amen.

2. The Commemoration of the Resurrection of the Lord Christ from the dead.

On this day also the salvation was completed by the holy Resurrection, for Our Lord when he had finished His work upon earth, during a period of thirty three years, suffered of His own free will on the eve of the twenty-seventh day of this month, and He rose from the dead on this very day. As it was on this very day the incarnation of Christ was announced to the people of the world who were awaiting Him. On friday, the living and the dead rejoiced in their Salvation, and on sunday the living became certain of it, and they knew of their resurrection by the Resurrection of the body of Christ, Who was the first-fruits of the dead as the apostle Paul Said: "But now Christ is risen from the dead, and has become the firstfruits of those who have fallen asleep." (1 Corinthians 15:20)

We ask Him according to His great mercy and His compassion that He may grant us the forgiveness of our sins. Amen.