Baramouda 17 : The Martyrdom of St. James the Apostle Brother of St. John the Apostle. 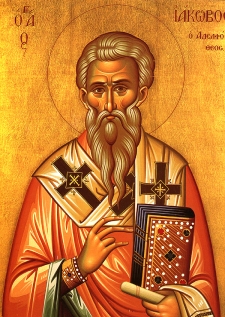 The Martyrdom of St. James the Apostle Brother of St. John the Apostle.

He always advised his flock to give alms to the poor, the needy, and the weak. They accused him before Herod who called him and asked him: "Are you the one that instigating the people not to give the taxes to Caesar but to give it to the poor and the churches?" Then he smote him with the sword, cutting off his head, and St. James received the crown of martyrdom.

Clement of Alexandria, from the fathers of the second century, said: "The soldier that seized the Saint, when he saw his courage, he realized that there must be a better life and asked the Saint for his forgiveness. Then the soldier confessed Christianity and received the crown of martyrdom (Acts 12:1,2) along with the Apostle in the year 44 A.D."

Because Herod saw that it pleased the Jews, he proceeded further to seize Peter also. So when he had apprehended him, he put him in prison, and delivered him to four squads of soldiers to keep him, intending to bring him before the people after Passover. (Acts 12:3-4)

So on a set day Herod, arrayed in royal apparel, sat on his throne and gave an oration to them. And the people kept shouting, "The voice of a god and not of a man!" Then immediately an angel of the Lord struck him because he did not give glory to God. And he was eaten by worms and died. (Acts 12:21-23)