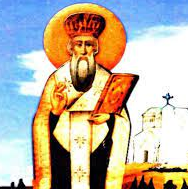 On this day, St. Babnuda (Paphnute), who was from Dandara (Dendereh), was martyred. This Saint was a hermit monk. The angel of the Lord appeared to him and told him to put on the priesthood vestments and go appear before Arianus, the governor.

Arianus arrived with his ship and embarked by the city of Dandara, looking for that Saint. The Saint came to Arianus and cried out in his face with a loud voice, saying: "I am Christian, and I believe in the lord Christ." When the Governor knew that he was the anchorite for whom he sought, he ordered him to be tortured severely. He chained him with iron fetters and cast him in a dark prison. A heavenly light shone upon him and an angel of the Lord appeared to him, healed his wounds, and comforted him.

There was in the city a man, whose name was Kyrillos, with his wife, his daughter, and twelve young men. The Saint preached them and confirmed them in faith. They were all martyred by cutting of their heads, and they received the crown of martyrdom. The Governor was raged of him and ordered to hang a rock in his neck and cast him in the sea, and St. Babnuda received the crown of martyrdom.