Baramouda 4 : Martyrdom of Sts. Boktor, Decius, Acacius, Irene the Virgin, the Departure of Anba Isaac, the Disciple of Anba Apollo, and the Departure of Pope Gabriel II, the Seventy Pope of Alexandria, who was known as Ibn Turaik. 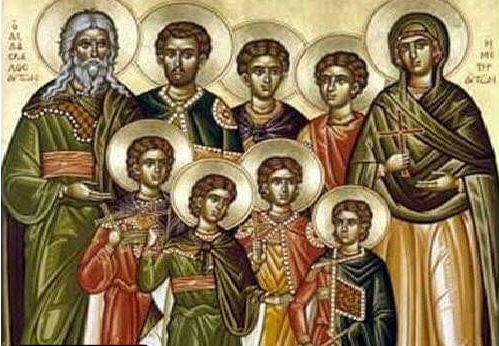 1. Martyrdom of Sts. Boktor, Decius, Acacius, Irene the Virgin and those with them from the fourth century AD

On this day the saints were martyred. Sts. Boktor, Decius, Irene the Virgin, and those with them of men, women and virgins. And that is because they were at the time of the reign of King Constantine the Great and his son, who demolished many pagan temples and then turned them into churches on the name of the Virgin and the names of the saints. And when the infidel Julianus became king, he supported the worship of idols, made them good priests, and killed a great number of Christians.

May their prayers be with us. Amen

2. The Departure of Anba Isaac, the Disciple of Anba Apollo.

On this day the holy father Anba Isaac the Disciple of the great father Anba Apollo, departed. This holy man renounced the world since his young age. He became a monk in the wilderness of Sheahat (Scetis), and a disciple of Anba Apollo for twenty five years. He fought a strenuous fight that weakened his body to kill his body desires, and control his will. He mastered the virtue of silence and quietness especially during the prayers and the Liturgies. He used to stand during the liturgy with his hands clasped and his head bent until the end of the prayer then he returned to his cell, shutting his door, and did not associate with any one that day. When they asked him: "Why do you not talk to anyone who wish to talk to you during prayers or the Liturgy?" He answered saying: "There is time for talking and there is time for praying." When his departure drew near the fathers the monks gathered around him to receive his blessing and they asked him: "Why did you flee from men." He answered them: "I was not fleeing from men but from Satan. If a man hold a lighted lamp in the wind, it will be extinguished. So, it is with us when our hearts and minds shine because of the prayers and the Liturgy then we talk with each other, our hearts and minds become dark." And this holy father having finished his good spiritual strife, departed in peace.

3. The Departure of Pope Gabriel II, the Seventy Pope of Alexandria, who was known as Ibn Turaik.

On this day also of the year 861 A.M. (April 5th., 1145 A.D.) the great and holy father Pope Gabriel II, the seventy Pope of the See of St. Mark , who was known as Ibn Turaik, departed. This Pope was from the nobles of Cairo, and he was a writer, scribe, distinguished scholar, with a commendable conduct. He transcribed with his hand many Arabic and Coptic books, he retained its contents and comprehended its interpretations. The elders of the people and the clergy chose him for the Patriarchal Chair, and his enthronement was on the 9th day Amshir, 847 A.M. (February 3rd., 1131 A.D.).

When he prayed his first Divine Liturgy in St. Macarius monastery as the custom of the previous Patriarchs, at the end of the Liturgy, he added to the profession after the saying: "I believe and confess to the last breath, that this is the life-giving Flesh that Thine Only-Begotten Son, our Lord, God and Savior, Jesus Christ, took from our Lady, the Lady of us all, the holy Mother of God, Saint Mary," this sentence "He made it one with His Divinity." The monks objected, lest it would be understood from that there was mingling between His Divinity and His Humanity, and asked him to refrain from using it. He refused saying: "This statement was added by a decree from the council of bishops." After a great and lengthy discussion, they decided to add this sentence: "Without mingling, without confusion, and without alteration," because of the fear of falling in the heresy of Eutyches, and he agreed with them.

During his papacy, he ordained 53 bishops and many priests, he drew up Canons and laws concerning inheritance, and many other matters. He never took any money from anyone, nor he touched the revenue of the churches, or that of the religious endowments for the poor. When the governor of that time asked him for money, the nobles and people collected three hundred Dinars in gold and gave them to the governor on his behalf. He remained on the Episcopal Chair for fourteen years, two month and two days, then departed in peace.

May his prayers be with us and glory be to God forever. Amen.