Bashons 11 The Departure Of St. Simon the Stylite. 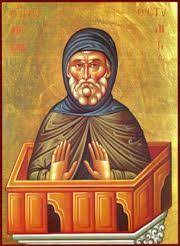 The Departure Of St. Simon the Stylite.

On this day of the year 461 A.D., St. Simon departed. He was born in Antioch in 392 A.D. His father's name was John, and his mother's name was Martha. Many miraculous things happened because of him. Before his mother had conceived of him, St. John the Baptist appeared to her in a dream and told her of her conception and what he would become. At age sixteen, he became a monk in the mountain of Antioch, and he led a great ascetic life in worship and prayer. An angel of the Lord appeared to him in a dream and guided him in his monastic life to the life of St. Pachomius. He excelled in his worship to a level beyond the normal human level, so that he lived alone on a high place like a pillar, for 45 years, during which he ate grass.

This father wrote many useful ascetic teachings, and explained many church books. He departed in peace.