Bashons 21 : Commemoration of the Holy and Pure Virgin Mary 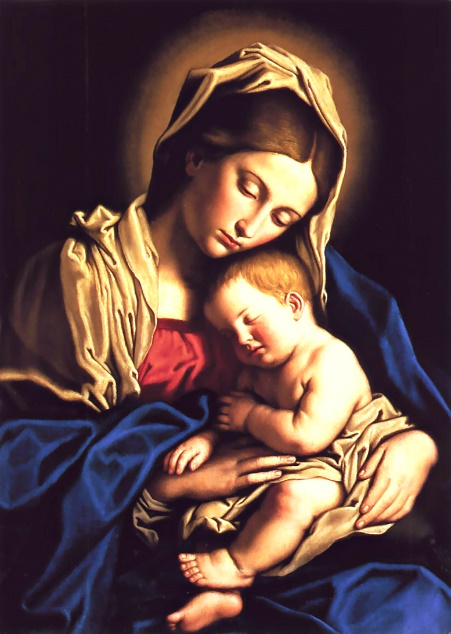 Commemoration of the Holy and Pure Virgin Mary.

On this day, the church commemorates the pure and Virgin St. Mary, the mother of the Savior of the world, the intercessor of all the Christians, from whom came the salvation of Adam and his posterity. May her intercession be for us all. Amen. Departure of St.Marcian (Martinianus) On this day also, St. Marcian departed. He was born in the city of Caesarea of Palestine. He became a monk since his young age at an elderly holy man living on a mountain near by his town called mount El-Safina (The ship). He fought a great and strenuous fight with many worships and he lived there for sixty six years, and his virtues became known. An evil woman heard of him, and she said to some of those who talked about his virtues: "For how long you will continue to praise him, while he is in a wilderness where he does not see the face of a women? If he saw me, I would stain his virginity and defile his holiness". They rebuked her for what she said, because of what they knew of the purity and holiness of this Saint, but she made a wager with them that she would go to him and make him fall in sin. She straightway, rose up, took her ornaments, her expensive apparels and her perfumes in a piece of cloth, and put on an ugly dress and covered her face. She went to a place close by where the Saint was and waited until the evening, then knocked on the door of his cell, weeping, pretending that she had lost her way, and asked him to let her stay with him until the morning. The Saint pondered about her, if he left her outside, the wild beasts might eat her, and if he brought her in, the warfare would increase against him because of her. Finally, he opened the door to her, and went to another place in the cell. She arrayed herself in her beautiful apparel, adorned and perfumed herself, then attacked him tempting him to commit sin with her. He knew that she was a snare of Satan plotted up for him. He told her: "Wait a little for me until I look at the road, for some people are used to come to me here every now and then." He went out and lighted a great fire, and he started throwing himself in the fire time after time saying to himself: "If you can't bear the pain of a little fire, how can you bear the torment of the fire of hell?" Then he fell on the ground weeping from the severity of the pain from the burns that he suffered on his feet and his fingers. As he tarried, she came out and saw him in that condition. She was terrified and she returned to her senses. She stripped off her expensive raiment, knelt at his feet, and begged him to help her to save her soul. He started to preach her telling her about the vanity of this world and its lusts, and she repented with all her heart. He took her to one of the convents, and asked the abbess to take charge of her and she lived there a life of purity and ascetism that was pleasing to God to the end of her life. She reached a high degree of holliness, received the gift of healing and she healed many from their infermities. But as for St. Martinianus, fearing lest the enemy might bring to him another woman, departed to an island in the middle of the sea. He made an agreement with a sailor to sell the works of his hand, and to bring him food. However, a ship was wrecked near by the island, and a woman managed to hang on to one of the planks, and the waves washed her to this island. When the Saint saw her, he was preplexed and wanted to leave the island. The woman asked him to make her a nun and he did as she wished then gave her all what he had of bread. He crossed himself with the sign of the cross, and threw himself in the sea, hanging on the plank that she hung on and he put himself in the hand of the Almighty. The waves threw him on the land, and he wandered about in the mountains and deserts for two years until he arrived to the city of Athens, where he became ill. He called the bishop, and told him all what had happened to him, and then he gave up his soul in the hand of the Lord, and they buried him with great honor. The woman that remained on the island, the sailor continued to bring her food until she departed, then he took her body to his country.

May her prayers be with us and glory be to God forever. Amen.