Bashons 5 : The Martyrdom of St. Jeremiah the Prophet. 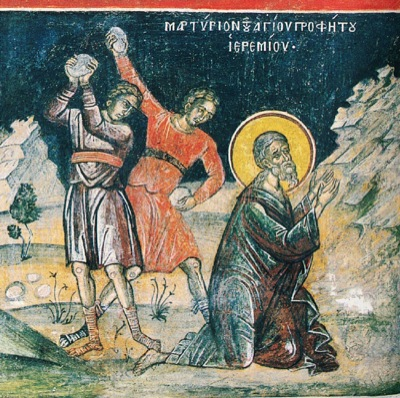 The Martyrdom of St. Jeremiah the Prophet.

On this day, the prophet Jeremiah, one of the major prophets, the son of Hilkiah the priest, was martyred. He prophesied in the days of Josiah son of Amon, king of Judah and Jehoiakim son of Josiah. God had chosen him for He said: "Before I formed you in the womb I knew you; before you were born I sanctified you; I ordained you a prophet to the nations" (Jr 1:5). He rebuked the children of Israel for they left the worship of God and rejected His Commandments. He warned them of the anger of God if they did not return on their transgressions. When he saw their hard hearts and the fast approaching judgement of the Lord, he prayed fervently weeping so that God might forgive the sins of his people. God rejected his prayers with regard to those who did not obey him, and He moved Nebuchadnezzar to besiege Jerusalem. His soldiers conquered it under the leadership of Nebuzardan who killed many of them inside the city. After they had taken all the precious possessions of the temple, the king's palace, and the nobles of the people, they took with them all those who were left alive to Babylon. Among those who were driven to exile was the prophet Jeremiah. Nevertheless, when Nebuzardan saw him bound with the rest, he set him free. He then wrote his "Lamentations" for the destruction of the city of Jerusalem, the temple and the exile of his people for 70 years in babylon.

This Prophet prophesied about the coming of Our Lord and Savior, and His sufferings and passion. His life ended when the jews themselves stoned him in Egypt, and he died a martyr in prison.

May his prayers be with us and glory be to God forever. Amen.