Bashons 8 : The Martyrdom of St. John of Senhout, and the Departure of St. Daniel the Archpriest of Sheahat (Scetis).

1. The Martyrdom of St. John of Senhout.

It came to pass that when he was tending the sheep flock of his father, the angel of the Lord appeared to him, showed him a crown of light and said to him: "Why are you sitting here while many others are persecuted, now rise up and go to the city of Atrib (Banha), struggle for the Name of the Lord Christ"; then the angel gave him the salutation of peace and departed from him.

He bade farewell to his parents, went to the Governor, and confessed the Lord Christ before him. The Governor delivered him to one of the soldiers to entreat him kindly that perhaps he would change his mind and be obedient to him. However the Saint performed several miracles before the soldier that made him also believe in the Lord Christ and received the crown of martyrdom by the hands of the Governor. The Governor became angry and tortured the Saint with every kind of torture, but the Lord strengthened him and made him to endure it. Then the Saint was sent to Ansena (Antinoe), where he was again tortured. At the end they cut off his head by the sword. Julius El Akfahasy took his body, shrouded, and sent it to his town Senhout. The people received him with hymns and praise, and placed him in the church. The body of the Saint now is located in Shoubra El-Khema in Egypt. 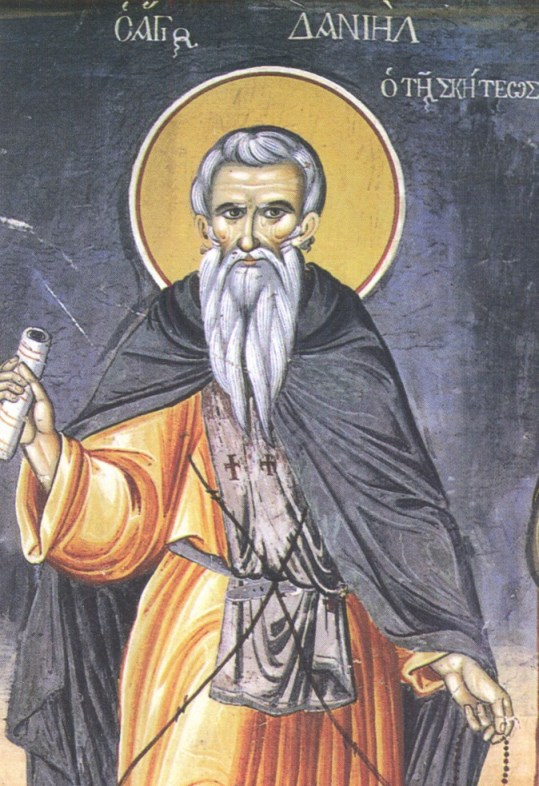 2. The Departure of St. Daniel the Archpriest of Sheahat (Scetis).

On this day also the holy father Anba Daniel the Archpriest of Sheahat (Scetis), departed. He was perfect and pure father. When his fame was noised abroad, many came to him among whom was St. Anastasia disguised in a man's apparel. She became a nun, and lived in a cell near him for 28 years and no one knew who he (She) was.

One day, the Saint saw a person whose name was Olagi (Eulogius), who worked as a stone cutter for a Karat of gold each day. With a very small portion of this he lived and with the remainder he fed the poor without saving any thing. When Abba Daniel saw his good fight and the excellence of his deeds, he asked God to give Olagi more money to increase his deeds of mercy. God answered his prayer, and Olagi found a treasure when he was cutting the stones, which he took and went to Constantinople. With the newly found money he became a minister to the Emperor, and forsake the deeds of mercy.

When St. Daniel heard about this, he went to Constantinople, and found what had become of Olagi, and that he had abandoned his deeds of mercy. Then the Saint saw in a vision as if the Lord Christ is sitting judging among the people and that he commanded to crucify St. Daniel and demanded from him the lost soul of Olagi. When the Saint rose up from his sleep, he went back to his monastery, and entreated God to bring Olagi back to his former state. The angel of the Lord appeared to him and rebuked him for rejecting God's judgement of His creation. Afterwards, the Emperor of Constantinople died and another reigned who dismissed Olagi and took his money and wanted to kill him. He escaped in order to save his life and returned to his town to cut the stones as before. Anba Daniel met Olagi and told him all what had happened to him because of him.

Many hardships befell St. Daniel because of the faith, and God manifested many miracles through him. He knew in advance the time of his departure from this world, he gathered all the monks around him, commanded, strengthened, and comforted them and then departed in peace.