Paona 13 : The Departure of St. John, Bishop of Jerusalem, and the Commemoration of the Archangel Gabriel, the Announcer of Daniel the Prophet.

1. The Departure of St. John, Bishop of Jerusalem.

After the ordination of St. John a bishop, the enemy of good led him astray through the love of money. He gathered much money, made silver vessels for his table, and neglected the poor and the needy. When St. Epiphanius heard that, he was troubled for what he knew about his friend St. John, from asceticism, righteousness, worshipping and being merciful. St. Epiphanius, because of his old friendship with St. John, came from Cyprus to Jerusalem. He made it appear that he had come to visit and worship the holy places, and visit the saints, but in fact he came to meet Abba John. When he arrived in Jerusalem, Abba John invited him for a visit. He prepared a table for St. Epiphanius and put these silver vessels on the table before him. When St. Epiphanius saw that, his heart was in pain, for he saw that his friend Abba John had in him no mercy for the poor and the needy. St. Epiphanius devised a plan to put his hands on these silver vessels. He went to one of the monasteries of Jerusalem, and sent to Abba John asking to borrow these vessels from him. He pretended that some of the elders of Cyprus came to visit him and he wished to offer them food using them. When Abba John sent the vessels to St. Epiphanius, he took them, sold them and gave the money as alms to the poor and needy.

A few days later, Abba John asked for the vessels, but St. Epiphanius asked him to wait a while on him. Abba John repeated his demand a second and a third time. When St. Epiphanius did not return them, Abba John seized him by the hem of his garment in the church of Resurrection and said to him, "I will not let you go until you give me back my silver vessels." St. Epiphanius prayed to the Lord Christ, and entreated Him for the sake of his old friend. Abba John became blind. He wept, and entreated St. Epiphanius to help him. St. Epiphanius prayed for his sake and one of his eyes was healed. He looked at him and said, "Behold, the Lord Christ has left blind one of your eyes as a reminder for you." He reminded him of his earlier benevolent life, and told him that he had sold his vessels and gave their price as alms. He also told Abba John that he only came to Jerusalem to substantiate what he had heard about his greed and love of the world. Abba John awoke from his foolishness and inadvertence. He walked diligently in the path of charity beyond what can be described. He gave as alms all that he owned of money, clothes, and the vessels. He forsake all things worldly to the point that they did not find even a "Dirham" with him when he departed. God granted him the gift of healing the sick and performing signs. After he finished in his episcopate thirty one years, he departed in peace. 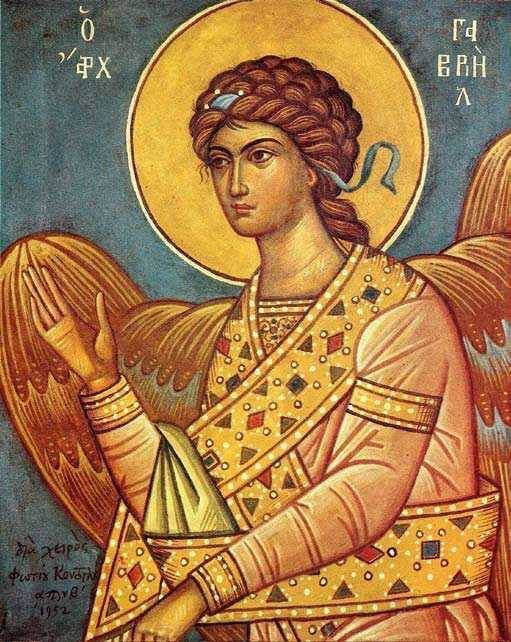 2. The Commemoration of the Archangel Gabriel, the Announcer of Daniel the Prophet.

On this day also, the church in Egypt celebrates a feast for the honorable angel Gabriel. The angel Gabriel announced Daniel with the return of the children of Israel from captivity, the coming of the Lord Christ, the time of His coming, that He would be killed, the destruction of Jerusalem, and that no other Messiah would come after Him except the anti-Christ. This angel is the one who announced to Zachariah the birth of John, and six months later, he came with the glad tidings of the salvation of the world when he announced to the Virgin Mary saying, "And behold, you will conceive in your womb and bring forth a Son, and shall call His name JESUS. He will be great, and will be called the Son of the Highest; ... And He will reign over the house of Jacob forever, and of His kingdom there will be no end." (Luke 1:31-33) Therefore, our church has arranged this feast to venerate this honorable angel.