Paona 14 : The Departure of Pope Yoannis the Nineteenth, 113th Patriarch of Alexandria, and the Martyrdom of Sts. Apakir, John, Ptolemy and Philip. 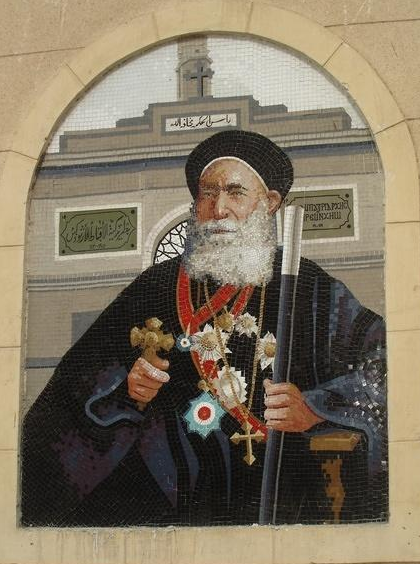 1. The Departure of Pope Yoannis the Nineteenth, 113th Patriarch of Alexandria.

On this day, of the year 1658 A.M. (1942 A.D.) Pope Yoannis the Nineteenth, 113th Patriarch of Alexandria, departed. He was born in the village of Dair Tasa, Asyiut governorate in the year 1571 A.M. (1855 A.D.). His parents were righteous, therefore he was raised on piety and godliness. He drank the love of virtuous life and loved, since his young age, to read the biographies of saints. He longed to follow their example, accordingly he went to the monastery of the Virgin Lady known as El-Baramous in Wadi El-Natroun, in the month of Baramoudah, 1591 A.M. He became a monk on the third of Kiahk, 1592 A.M. (1876 A.D.). Because of his fervent worship, intelligence, and intellect, the fathers unanimously agreed to nominate him to be a priest. Pope Kyrillos the fifth, 112th Patriarch, ordained him a priest in the year 1593 A.M., then hegumen in Baramhat, 1594 A.M., and appointed him on the same day to be the head of the monastery. He remained the head of the monastery for ten years, during which he was an example of, ambition, honesty, purity of conduct, firmness, godliness, and good management.

When the Chair of the diocese of El-Biharah became vacant, the people chose Yoannis a metropolitan for that Chair. He was ordained on the 12th day of Baramhat, 163 A.M. (1887 A.D.) and also was appointed as a deputy of the See of St. Mark. After the departure of Anba Yoannis, metropolitan of El-Menofaya at that time, the people of the diocese nominated him to care for them. The diocese of El-Menofaya was added to his duties in the year 1610 A.M. (1894 A.D.), and he became the metropolitan of El-Biharah, El-Menofaya, and the deputy of the See of St. Mark.

Since his official seat was in Alexandria, he established there a theological school to educate the monks. He sent from its students a mission to Athens for higher theological studies.

The revenue of the church properties was inconsiderable. By his good judgement, the revenue increased year after year. Because of the highrise buildings that he built and the renovation of the old ones. He also gave great care for the Coptic schools, elementary and high, until their standard became equivalent to the best schools. He built and renovated most of the churches in his parish. He also gave special attention to the monasteries in his jurisdiction, which were improved greatly because of his good care and close supervision.

Because of his foresight, and prudence, the government chose him as a representative for the Copts in many councils and committees at the general assembly, the committee for formulating the constitution and many others.

He spent forty-two years as a metropolitan, which were full of splendid works. When the blessed Pope Kyrillos the fifth, departed, on the 1st day of Misra, 1643 A.M. (August 7th, 1927 A.D.) the Holy Synod convened on the fourth of Misra. They unanimously agreed to chose him Acting Pope to run the affairs of the church until ordaining a patriarch. As a result of that, the Holy Synod had received many nominations from the parishes approving that choice.

He performed his duties as Acting Patriarch for one year, four months, and ten days. During this period he administered the affairs of the See of St. Mark very well, during which also the Holy Synod, with Anba Yoannis presiding, issued a canon to regulate the affairs of the monasteries and the monks. He organized a committee to oversee the church properties and those of the monasteries and to review their accounts.

From what everyone knew of his purity, virtuous life, good character, asceticism, and piety, they all unanimously agreed to chose him a patriarch with nominations from the bishops, priests and lay leaders. He was enthroned a patriarch on Sunday the 7th day of Kiahk 1645 A.M. (December 16th, 1928 A.D.) in the great St. Mark cathedral in Cairo (Azbakiah). That took place with a great celebration attended by the representatives of the King, princes, ministers, important Egyptian personalities, the metropolitans of different denominations eastern and western, and ambassadors of foreign countries.

After his ordination, Pope Yoannis directed his attention to caring for the affairs of the Coptic People and the church. He established a higher theological institution for the education of the monks in the city of Helwan. He ordained for the kingdom of Ethiopia, a Coptic Metropolitan and four well-learned Ethiopian bishops. He travelled to Ethiopia to reaffirm the unity between the Coptic and Ethiopian churches. He stayed there for thirteen days where they received him with great honor and respect. In Addis Ababa, he ordained the head of the Ethiopian monks (the successor of St. Takla Haymanot) a bishop.

With the will of God, he made the Holy Oil (Myron) in the year 1648 A.M. (1930 A.D.). The last time the oil was made was one hundred and ten years earlier during the papacy of Pope Peter, 19th Pope of Alexandria. Pope Yoannis made the Holy Oil a second time, specially for the kingdom of Ethiopia, attended by Anba Kyrillos, metropolitan of Ethiopia, and Anba Peter, an Ethiopian bishop.

His contributions, too numerous to be mentioned completely, include watching over the welfare of the church, kindness to the needy, support for charitable organizations, moral and financial support for the Coptic teaching institutions, and assistance on valuable projects that financially and spiritually benefitted the Copts.

During Pope Yoannis' papacy, a war broke out between Ethiopia and Italy, during which most of the Ethiopian bishops died except Anba Abraam and another bishop. When Italy occupied Ethiopia, the Emperor departed from his country. Anba Kyrillos, the metropolitan of Ethiopia, was exiled to Egypt, for he refused to agree with Italy on separating the Ethiopian church from the Coptic Orthodox church. In November, 1937 A.D., the Italian governor of Ethiopia decided the independence of the Ethiopian church and its separation from the Alexandrian See. He appointed Anba Abraam, the Ethiopian bishop, a patriarch for Ethiopia. Nevertheless, God punished him for his betrayal. He became blind and died shortly after. The Alexandrian Holy Synod decided to excommunicate him, not recognizing him nor the bishops that he ordained. This situation in Ethiopia did not last long; during the Second World War the Emperor of Ethiopia regained his kingdom from Italy. Anba Kyrillos returned to his church with great honor, in May 1942 A.D.

When Pope Yoannis had realized the return of the Ethiopian church to its mother church, the Coptic Church, he was stricken with the ailments of old age. He departed in peace on Sunday 14th day of Baounah, 1658 A.M. (June 21st, 1942 A.D.).

May his prayers be with us. Amen

2. The Martyrdom of Sts. Apakir, John, Ptolemy and Philip.

On this day also, Sts. Apakir, John, Ptolemy and Philip, were martyred. St. Apakir was born in the city of Damanhur, and had a rich brother called Philip. They had agreed with two priests, one called John and the other called Ptolemy, to receive the crown of martyrdom. They went to the city of Kartsa (Kartes), and confessed the name of the Lord Christ before the Governor. The governor ordered to shoot them to death with arrows, but the arrows did not touch them. They were then cast into red hot fire, but the angel of the lord delivered them from it. Then the governor commanded to tie them to the tails of horses, and to drag them from Kartes to the city of Damanhur, but the Lord guarded them from any harm. The governor commanded that their heads be cut off outside the city of Damanhur. They received the crown of martyrdom. People from the city of Sa came and took the body of St. Apakir, built for him a church, and laid his body inside it. Many signs and wonders took place through him. The people of Damanhur came and took the bodies of John, Ptolemy, and Philip, wrapped them in expensive shrouds and buried them there.