Paona 15 : The Turning Over of the Relics of the Great St. Mark the Apostle by the hand of Pope Paul the Sixth, Pope of Rome, and the Consecration of the Church of Mari Mina at Maryut.

1. The Turning Over of the Relics of the Great St. Mark the Apostle by the hand of Pope Paul the Sixth, Pope of Rome.

On this day, of the year 1684 A.M., that coincided with Saturday the 22nd of June, 1968 A.D., and in the tenth year of the papacy of Pope Kyrillos the sixth, 116th Pope of Alexandria, the official delegation of the Pope of Alexandria received the relics of the great St. Mark the Apostle, the evangelist of the Egyptian land and the first Patriarch of the See of St. Mark from the hand of Pope Paul the Sixth, Pope of Rome, in the Papal palace, Vatican City.

The delegation consisted of ten metropolitans and bishops, seven of them were Coptic and three Ethiopians, and three lay leaders. The Alexandrian papal delegation left Cairo on Thursday the 23rd day of Baounah, 1684 A.M. (June 20th, 1968 A.D.) on a special plane accompanied by 90 of the Coptic personalities, among them, seven priests. They were received by a delegation of cardinals and priests delegated by Pope Paul the Sixth, and the ambassador of Egypt to the Vatican, at the airport in Rome.

Twelve o'clock, the morning of Saturday the 15th of Baounah (June 22nd), was the appointed time for the Alexandrian Papal delegation to meet the Pope of Rome and receive the relics of St. Mark the Apostle. At the appointed time, the delegation went in headed by Anba Marcus, metropolitan of Abu-Teeg and Tahta, and were received by Pope Paul VI in his private office. Pope Paul greeted the delegation, commending Pope Kyrillos the sixth, and the church of Alexandria. He congratulated the delegation on the opening of the new St. Mark Cathedral and the receiving of the relics of St. Mark. Anba Marcus, the head of the delegation, replied with a short speech, in which he carried the greetings of his brother, the Pope of Alexandria. Then he handed him a letter from Pope Kyrillos the sixth, thanking him and introducing the members of the delegation.

Pope of Rome, along with the head of the Alexandrian delegation, then carried the box that contained the relics of St. Mark. They all walked in a procession to a grand room, which was prepared to receive the Copts, accompanied by the official delegates to witness this historical and joyful moment. The box containing the relics was placed on a special table. The Roman Pontiff came forward and knelt before the box and kissed it. He was followed by Anba Marcus, the head of the Alexandrian Papal delegation, who was followed by the members of the delegation. During the veneration of the relics of St. Mark the Apostle, the Coptic priests and deacons present chanted appropriate ecclesiastical hymns. Joy filled the hearts of everyone, Egyptian and foreign. An atmosphere of spirituality and holiness filled the room.

The Roman Pope then sat on his throne, and Anba Gregorius, bishop of higher studies and scientific research, gave a speech in English, representing the delegation. He expressed in it the greetings of Pope Kyrillos the Sixth, and the joy of the Christians of Egypt and Ethiopia for the return of the relics of St. Mark the Apostle after eleven centuries. During which the body of St. Mark was absent from the country in which he was martyred.

Pope of Rome, replied in an official speech in French, that he read while sitting on the throne. In it he exalted the history of the Alexandrian church, and its long struggle in the field of dogma. He also praised its heros, and its learned people such as Athanasius the apostolic, Kyrillos (Cyril) the Pillar of Faith, Pantaenus and Clement. He hoped that the celebration of the day would be a sign of love and a bond between the church of Alexandria and the church of Rome. The Roman Pope asked in his speech also from the head, Cardinal Doval, and members of the Roman Papal delegation to carry his greetings, admiration, and appreciation to Pope Kyrillos the Sixth, the clergy of the church of Alexandria, Egypt and its people.

The Roman Pope, then gave Anba Marcus, the head of the Alexandrian Papal delegation, an official document dated May 28th, 1968 A.D. testifying that the relics were authentic and belonged to St. Mark the Apostle, and were taken from their original place with veneration. The document was signed by Cardinal Porfeer, the deputy of Vatican City. Thus, the official celebration of handing over the relics of St. Mark the Apostle ended, and the delegation went back to their hotel.

May the blessings of St. Mark be with us all. Amen. 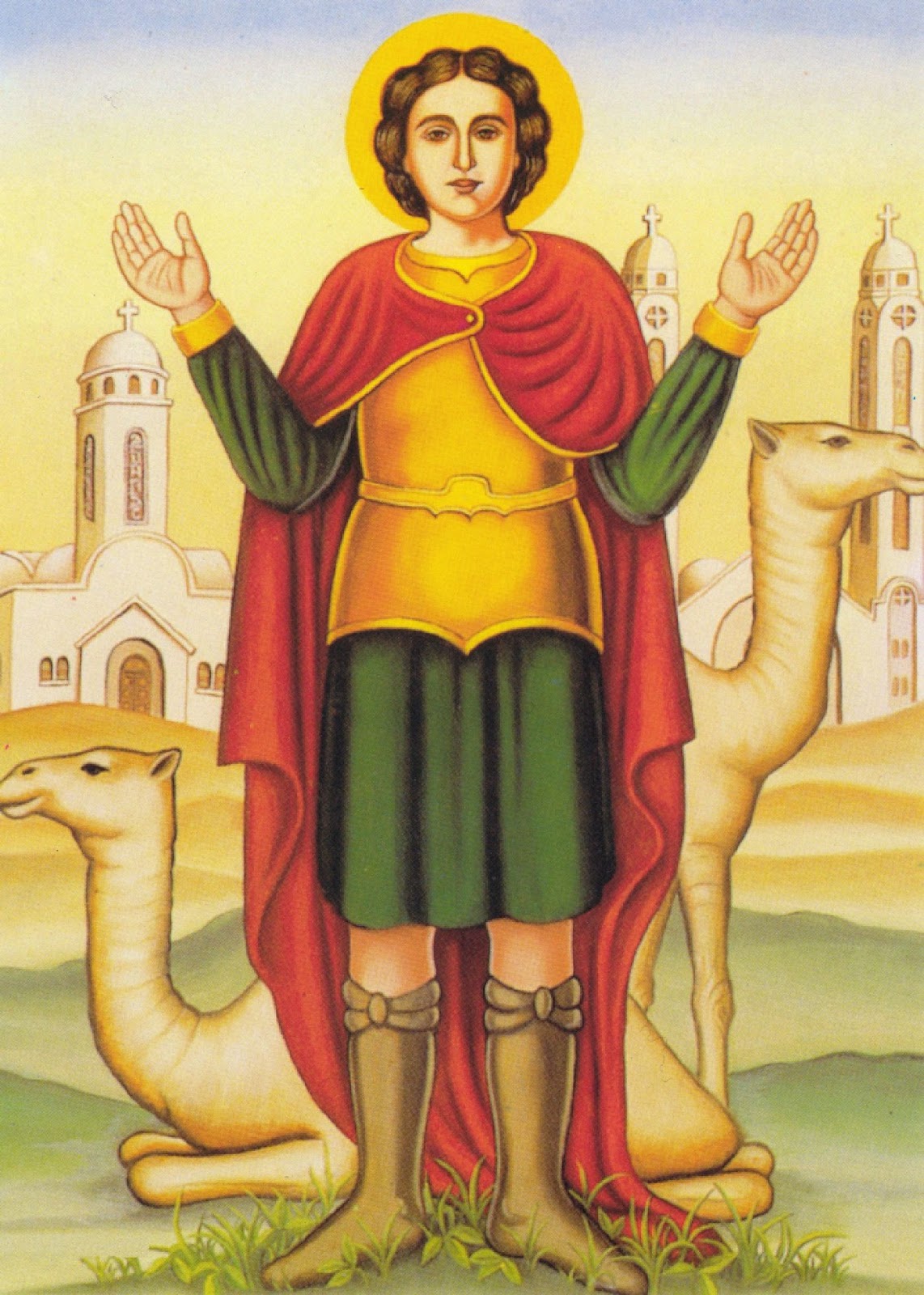 2. The Consecration of the Church of Mari Mina at Maryut.

On this day also, is the commemoration of the appearance of the body of the honorable saint, and great martyr Mari Mina, and the consecration of his church at Maryut (Mareotis).

Now, the body of this saint was hidden, and the Lord wished to reveal it. It came to pass that there was a shepherd, who pastured his sheep near the place where the body of the saint was buried. One day, one of his sheep, which was sick of a skin disease (mangy), dipped itself in the water of a pond which was near that place. It then went out of the water, and rolled itself in the sand of that place, and it was healed straightway. When the shepherd saw this wonder, he marvelled, and took the sand of that place and mixed it with the water of the pond. He smeared every mangy sheep, or any that had a deformity, and they were healed immediately.

The report of this shepherd became widespread in all the regions of the empire, until the emperor of Constantinople heard of it. He had an only daughter who was leprous. Her father sent her there. She questioned the shepherd about how she could get rid of her illness, and he told her. She took some of that sand and mixed it with the water. She retired to her quarters and smeared her body with the mixture and slept that night in that place. She saw in a dream St. Mina and he told her, "Rise up early and dig in this place and you shall find my body." When she woke up from her sleep, she found herself healed. She dug in that place, and she found the holy body. She sent to her father to inform him about what had happened. He rejoiced exceedingly, thanked God and praised His Holy Name. He sent men and money and built a church in that place which was consecrated on this day.

When Arcadius and Honorius reigned they ordered a city to be built there which was called Maryut. The masses came to this church interceding with the blessed Mari Mina. God had honored him by the miracles and wonders that were manifested from his pure body, until the Moslems occupied the city and destroyed it.

The biography of this saint is mentioned under the 15th day of Hatour.