1. The First Pontifical Liturgy in the New St. Mark Cathedral in the Monastery of Anba Rowais.

On this day, of the year 1684 (Wednesday, June 26th, 1968), the church celebrated the first Pontifical Liturgy in the new St. Mark Cathedral in the monastery of Anba Rowais, which was known as Dair El-Khandaq, where the relics of St. Mark were placed after his return from Venice and Rome.

On the morning of Wednesday the 19th of Baounah (June 26th) at about six o'clock, Pope Kyrillos took the box of the relics of St. Mark, that he had placed on the altar of the old St. Mark Cathedral in El-Azbakiah upon its arrival. He brought it in his private car to the new St. Mark Cathedral.

The Pontifical Divine Liturgy that was celebrated on this occasion was headed by H.H. Pope Kyrillos the Sixth, and participating with him were the patriarch Mari Ignatius Yacoub the Third, the Antiochian Patriarch for the Syrian Orthodox, and a number of Syrian, Indian and Armenian Orthodox bishops. This celebration was attended by Emperor Haile Selassie the First, Emperor of Ethiopia, Cardinal Doval, the head of the Roman Papal delegation and Cardinal of Algeria, many of the heads of different religions and representatives of churches from all around the world, and more than six thousand Egyptians and foreigners.

During the Liturgy, the box that contained the relics of St. Mark the Apostle was placed on a table in the middle of the eastern part of the altar of the Cathedral, and remained there till the end of the liturgy. Right after the liturgy, Pope Kyrillos went down carrying the box along with the Emperor, the Syrian Orthodox Patriarch and the heads of the churches in a magnificent procession. They went to the sanctuary that was prepared for St. Mark under the main altar of the Cathedral. Pope Kyrillos placed the box inside the marbled altar, which was covered by a large marble slab and on it was the altar table.

The different choral groups then sang, successively in different languages, songs and hymns that befit the occasion in salutation for St. Mark. They sang in Coptic, Ethiopian, Syrian, Armenian, Greek, Latin, and in Arabic. The day was a joyous day and one of the most blessed days in the history of the church of Alexandria.

May the blessings of St. Mark be with us all. Amen.

2. The Departure of Pope Archelaus, the Eighteenth Pope of Alexandria.

On this day also, of the year 28 A.M. (June, 312 A.D.) Pope Archelaus, the Eighteenth Pope of Alexandria, departed. He was a priest in the church of Alexandria. When Pope Peter the first, the seal of martyrs, received the crown of martyrdom, the believers in Alexandria agreed and gathered the bishops. They ordained Archelaus the priest a Patriarch instead of Pope Peter, as he commended before his departure from this world. When he was enthroned on the patriarchal chair in the 19th of Kiahk, 28 A.M. (December 24th, 311 A.D.), a group of people came to him and asked him to accept Arius in the church. He accepted their petition against the command of his father Pope Peter, but he did not remain on the Chair longer than six months, then departed. 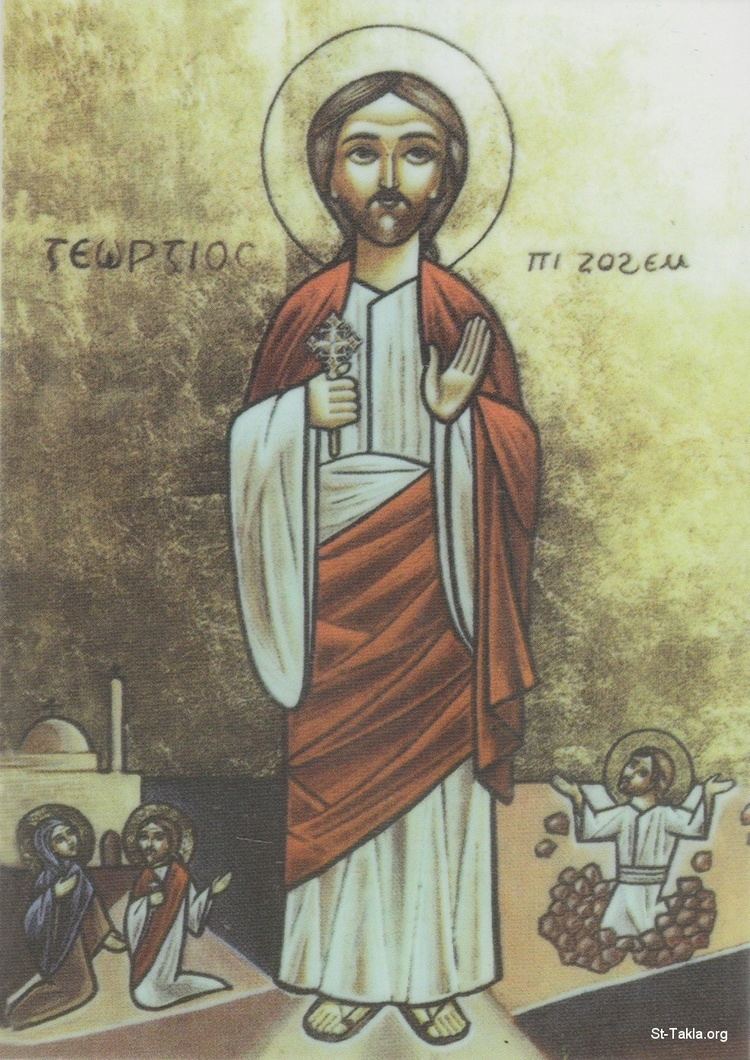 3. The Martyrdom of St. George (Girgis) known as El-Mezahem.

This day also, in the year 675 A.M. (June, 959 A.D.), marks the martyrdom of St. George, the new martyr, known as El-Mezahem. His father was a Moslem bedouin. He married a Christian woman from the city of Demerah El-kibliah. He had from her three sons, one of them was this Saint, and they called him El-Mezahem.

He used to go with his mother to the church at a young age. He also used to see the children of the Christians dress in white on the days that they partook of the Holy Mysteries. He longed that his mother would dress him like them, and allow him to eat from whatever they ate at the altar. His mother told him that could not be, unless he was baptized. She gave him a portion of the blessed Eulogia bread, that they distributed to the people, and it tasted in his mouth like that of honey. He meditated in his heart and said, "If the taste of this bread that was not consecrated by prayers tastes like this, what will be the taste of the Offering?" His longing for the faith in Christ increased from that time.

When he grew up, he married a Christian woman, and he told her that he wished to become a Christian. She told him that he had to be baptized. He went to Birma, was baptized there and was called George (Girgis). When this matter became known, he went to Domiat. The Moslems there recognized him, seized him and tortured him. Then he escaped and fled to the city of Saft Abu-Trab, where he stayed for three years. When his matter became known again he went to the city of Katurah, and remained there serving the church of St. George, then went back to Demerah. When the Moslems of the city of Demerah knew his history, they seized him, and delivered him to the governor who put him in prison. The Moslems assembled and broke the door of the prison. They beat the Saint severely, split open his head, and left him between life and death. When some of the believers came on the morrow to bury him, for they thought that he was dead, they found him alive. The Moslems convened a council, and threatened him, but he did not change his conviction. They hung him up on the mast of a ship, but the governor ordered that he be taken down and cast him up in prison.

His wife strengthened him, and comforted him. She taught him to believe that the punishment which had come upon him was because of his sins; lest Satan lead him astray and he might boast that he became like the martyrs. The angel of the Lord appeared to him, comforted him, strengthened him, and informed him that he would receive the crown of martyrdom on the next day. On the next morning, the Moslems gathered with the governor and demanded from him that the head of El-Mozahem be cut off. He handed him over to them. They took him, and cut off his head near the church of the angel Michael in the city of Demerah. They cast his body in hot fire for a day and a night. But his body did not burn, so they put him in a barrel and threw him into the river. By the Will of God the barrel landed on the shore of an island, which was inhabited by a believing woman. She took his body, shrouded him, hid him in her house until they built a church for him, in which they laid his body.

4. The Martyrdom of St. Bishai Anoub.

On this day also, St. Bishai Anoub, which means "fine gold", was martyred. He was from the city of Banios, in the diocese of Domiat. He was one of the soldiers of Cyprianus, governor of Athribis. When persecution was incited against the Christians, he went to the governor and confessed his faith in the Lord Christ before him. The governor tortured him, then sent him to the governor of Ansena (Antinoe). St. Bishai openly declared his faith in Christ before Atianus, the governor of Ansena, who tortured him severely. Finally, he ordered his head cut off outside the city. A great multitude followed him outside of the city. One of them, was the keeper of the lions of Arianus, the governor, and he had with him two lions bound with chains. One of them rushed forward, broke the chain, and attacked the Saint to devour him. Immediately, the angel of the Lord appeared, took the Saint and brought him to the city of Ain-Shams where his martyrdom was consummated.