On this day, of the year 91 A.M., is the commemoration of the consecration of the church of the Virgin Lady, the Mother of God. This church is in the city known as El-Mahammah (Mostorod) which means "bath" because of the fountain of water flowing from the spring. This spring the Mother of God had sprung out upon her return from her visit to the land of Egypt. When Joseph went to Egypt as the Angel had said, he went to Upper Egypt. On his way back, he came to El-Mataryah, and then to El-Mahammah. A church was built in that place in the name of the Virgin Lady.

May her intercession be with us. Amen. 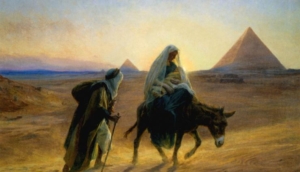 2. The Commemoration of St. Tamada and her children, and Armenius and his mother.

On this day also, is the commemoration of St. Tamada and her children, and Armenius and his mother.

May their intercession be with us. Amen.

3. The Martyrdom of George (Girgis) the new martyr.

This day also marks the martyrdom of George (Girgis), the new martyr. He was an Ishmealite as was his father. He believed in the Lord Christ and became a monk. They seized, and punished him severely. They took him before the Governor El-Zaher, where he confessed his faith in the Lord Christ. The Governor attempted to make him forsake his faith by offering him expensive gifts, but he refused. The Governor ordered to cut his neck off, and he received the crown of martyrdom in the year 113 A.M. (1387 A.D.).