Abib 1 : The Martyrdom of Saint Febronia the Ascetic, and the Departure of Saints Bioukha and Tayaban (Banayen) the priests. 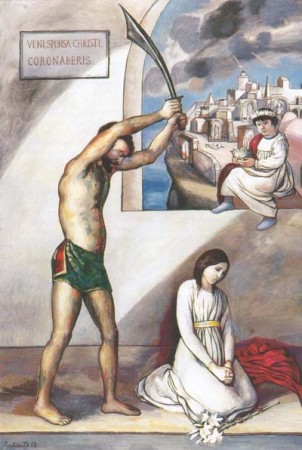 1. The Martyrdom of Saint Febronia the Ascetic.

On this day, St. Febronia, the ascetic virgin, was martyred. This saint was the niece of the superior of a convent that had fifty virgins, in a place called "Ouryana" in Mesopotamia. Her aunt brought her up in the fear of God and taught her the reading of the Holy Books. St. Febronia vowed herself to the Lord Christ, and she fought the good fight by asceticism, fasting for two days at a time, and unceasing in her prayers.

When Emperor Diocletian issued his edict to worship idols, many Christians were martyred by his hands. When the virgins heard that, they were afraid and left the convent and went into hiding. None was left in the convent except St. Febronia, another sister and the abbess.

On the following day, the envoys of the Emperor came, seized the abbess, and humiliated her. St. Febronia said to them, "Take me and set free this old woman." But they took her as well, bound in ropes, and brought them to the Governor. At that time she was twenty years old, and was attractive. The Governor asked her to worship the idols and promised her many things but she refused. He ordered that she be beaten with rods, and her dress to be torn off. The abbess cried out to him saying, "May God rip you up, O wild beast, for you want to put to shame this young orphan girl." The Governor was wrathful, and ordered St. Febronia to be squeezed by the wheel, and to comb her body with an iron comb until her flesh was completely torn. During all that, she prayed to the Lord asking for help. He then cut out her tongue and smashed her teeth so that she could not pray. But the Lord strengthened her and comforted her.

Finally, the Governor ordered her head cut off, and she received the crown of martyrdom. A righteous man took her body and shrouded it with costly shrouds, and placed it in a golden box.

On this day also, the fighters Sts. Bioukha and Banayen, departed. They were priests in the church of "Tunah" of the diocese of "Tanda". Their father was the steward of this church. It happened when the priest Banayen was celebrating the Divine Liturgy, someone came calling him to see his father who was dying in that instant. He answered him saying, "I cannot take off my priestly vestment before the end of the service. If God is willing, I shall see him before he dies, otherwise it will be the will of God."

His father asked for him three times, and he responded with the same answer. When he finished the mass, he found his father had departed. The church vessels were stored in a place known only by his father. Banayen the priest went to St. Daniel, the priest of the wilderness of Shiheet, who guided him by Divine inspiration, to the place where the vessels were stored. These two saints lived a virtuous life until they departed in peace.