1. The Departure of St. Ephraem El-Soriani (The Syrian).

On this day, of the year 379 A.D., the holy father, St. Ephraem (Ephraim) the Syrian, departed. He was born in the city of Nissibis, in the beginning of the fourth century to pagan parents, during the days of the righteous Emperor Constantine. It happened that he met with St. James bishop of Nissibis, who preached to him and taught him the particulars of the Christian Faith. Ephraem believed on his hands. St. James baptized him and Ephraim stayed with him. He excelled in his worship that surpassed his contemporaries. He debated the pagans and overcame them by the grace that was within him. When the council of Nicea convened, he went with his teacher St. James to attend the council.

One day, it happened that while St. Ephraem was praying, he saw a pillar of light which extended from earth to heaven. When he marvelled at what he saw, he heard a voice saying to him, "That what you saw is St. Basil, Bishop of Caesaria." St. Ephraem longed to see St. Basil and he went to Caesaria. He entered the church and stood in a corner of it. He saw St. Basil in his priestly vestments embroidered with gold. St. Ephraim doubted the holiness of St. Basil. The Lord showed him a white dove that alighted over St. Basil's head. God then inspired St. Basil of the presence of St. Ephraem. St. Basil called him by his name, and St. Ephraem marvelled at how he knew him. They greeted each other, and St. Basil ordained him a deacon.

St. Ephraem increased his asceticism, and many great virtues were manifested through him that surpass description. Among which was that of an honorable woman, who was ashamed to confess her sins orally to St. Basil. She wrote on a paper her sins which she had committed since her youth, and gave it to St. Basil. When he received it and knew what was written in it, he prayed for her. The piece of paper became blank except for only one great sin. The woman wept, and entreated him to pray for her that God might forgive this sin for her. St. Basil told her, "Go to the wilderness where St. Ephraem is and he will pray for you." The woman went to him and told him what had happened. He said to her, "I am not worthy of this honor, go back to St. Basil for he is a high priest. Go now quickly before he departs from this world." When the woman returned, she found that St. Basil had departed, and was carried on the heads of the priests. She wept, and threw the piece of paper on his coffin. She prayed to God interceding through the saint. Then, she took the piece of paper, and she found it completely blank.

St. Ephraem had performed many miracles. In his days, Ebn-Disan the Infidel appeared. This father debated with him until he overcame his erroneous opinions. He wrote many articles and discourses. When he completed his strife, he departed to the Lord. 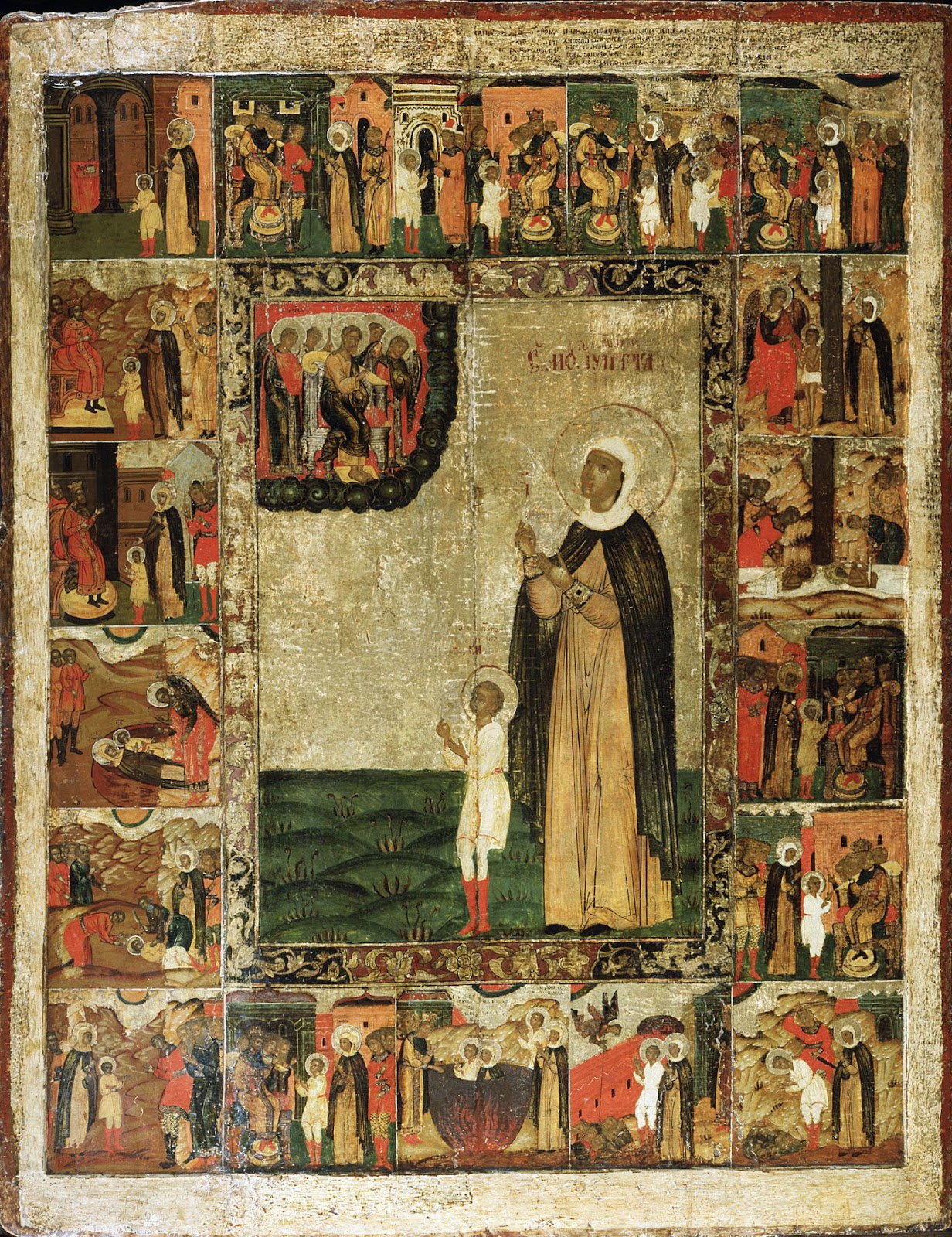 2. The Martyrdom of St. Cyriacus and St. Julietta His Mother.

On this day also, St. Cyriacus (Qyriacus) and St. Julietta, his mother, were martyred. When Cyriacus was three years old, his mother left Iconium, her native land, taking her son with her. She went to Tarsus, fleeing from the Governor that was persecuting the Christians. However, she found the Governor there in Tarsus. Some had laid accusation against her before the Governor. He brought her and ordered her to worship the idols. She answered him, "What you say to me cannot be accepted by a three year-old child." The governor said to her, "We can ask your child." God then made the child talk, who cried out saying, "Your gods are made of stone and wood by the hands of men, there is no other True God except my Lord Jesus Christ." Those who heard the child were amazed, and the Governor was exposed. For that reason, he inflicted pain over the child that surpassed his age. He also tortured his mother with many kinds of tortures. But the Lord God delivered them safely each time. Many saw this and believed in the Lord Jesus Christ, and received the crown of martyrdom. Finally, the Governor ordered to cut the heads off of St. Cyriacus (Qyriacus) and St. Julietta, his mother, and they received the crown of martyrdom.