Abib 18 : The Martyrdom of St. James the Apostle, Bishop of Jerusalem. 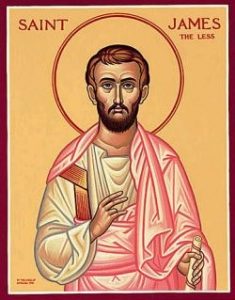 The Martyrdom of St. James the Apostle, Bishop of Jerusalem.

On this day, St. James the Apostle, Bishop of Jerusalem, who was the son of Alphaeus, was martyred. (Mat. 10:3) The Holy Bible mentioned his brothers, Joses, Simon, and Judas, the sons of Cleophas. (Mat. 13:55) The Greek word "Cleophas" means in the Syriac language "Alphaeus". His mother, the sister of the Virgin, was also called Mary and was the wife of Cleophas. (John 19:25)

When he grew up he was known as James the Just. For there was a drought in Palestine and he prayed to God, Who sent the rain and watered the land, as Josephus, the Jewish historian, testified. He was called James the Less, to identify him from St. James the son of Zebedee, and the brother of St. John the beloved.

It was said that the Lord had appointed him bishop of Jerusalem when he appeared to him. "After that He was seen by James, then by all the apostles." (I Cor. 15:7) He was called the head of the church in Jerusalem for it was the mother church and from it the Good News had spread to the other churches. He wrote a liturgy, with which the Armenians still pray.

During his time and in the year 53 A.D. a Council of the Apostles and priests convened in Jerusalem and St. James presided over it. During this Council St. James said, "Therefore I judge that we should not trouble those from among the Gentiles who are turning to God, "but that we write to them to abstain from things polluted by idols, from sexual immorality, from things strangled, and from blood ... " (Acts 15:19-21) St. James preached and taught the Name of the Lord Christ, brought many back to the faith, and baptized them. God wrought by his hands many signs and wonders.

One day, many of the Jews came to him and asked him to tell them about the Lord Christ. They thought that he would tell them that Jesus was his brother. St. James went up to the pulpit, and began to explain to them the Godhead of the Lord Christ, His eternal existence, and His equality with God the Father. When they heard this they were wrath with him, they dragged him down, and beat him severely. One of them beat the apostle on the head with an iron rod, and he delivered up his soul instantly.

It was said about this Saint, that he never drank wine, and never wore clothes, but always wore a linen loin-cloth, and that he kneeled so often during his worship and praying that his feet and knees became swollen, and the skin of his knees became like that of the camels.