Abib 20 : The Martyrdom of St. Theodore of Shotep. 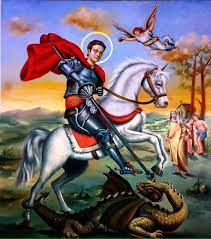 The Martyrdom of St. Theodore of Shotep.

On this day, of the year 220 A.D., St. Theodore of Shotep was martyred. His father's name was John and he was from the city of Shotep in Upper Egypt. He went with his regiment to the city of Antioch, where he married the daughter of a pagan noble man, and begot by her this St. Theodore. When his mother wanted to present him to the house of idols to be educated there, his father refused. She became angry, drove him away, and the child remained with his mother. His father John prayed ceaselessly, and entreated God to guide his son Theodore to the path of salvation. The child grew up, and learned philosophy, wisdom, and literature. The Lord Christ illuminated his heart, and Theodore went to a righteous bishop who baptized him. When his mother heard of this she was sorrowed greatly, but the Saint did not mind her.

He joined the army and advanced in the ranks until he became one of the great generals during the reign of Emperor Lucianus. The people of the city of Eukhitos worshipped a great serpent, and offered to him a human sacrifice every year. While St. Theodore was passing through this district, he saw a woman crying bitterly. He asked her about the reason for her crying. She answered him saying, "I am a widow and they have taken my two sons to offer them as a sacrifice to the serpent, although I am Christian." He said to himself, "They have wronged this woman, but God shall avenge her." He came down from his horse, and turned his face towards the East and prayed, then drew near the serpent. The people of the city were watching him from the tops of the walls of the city. The serpent was fourteen cubits long, but God gave him power over it, and he speared it with his spear and killed it, and delivered the sons of the widow.

After this, Theodore came to Egypt to search for his father, and he stayed with him until he died, and then returned to Antioch. He found that the Emperor had apostatized the faith and started to persecute the Christians. He came before him and confessed the Lord Christ. The Emperor ordered him beaten with rods, burned, and cast into the fire. He delivered up his soul and received the crown of martyrdom. A Christian woman took his body - it was said that she was his mother - after she gave much money to the soldiers and hid his body until the end of the time of persecution.  Churches were built in his name in many cities.