1. The Commemoration of the Martyrdom of St. Macarius, the Son of Basilides (Wasilides) the Minister.

On this day, the great St. Macarius, the son of Basilidis the Chancellor, was martyred. When the messengers reviewed the order of Emperor Diocletian, which dictates the worship of idols, with Macarius, he did not heed them. When the Emperor knew that, he sent Macarius to the governor of Alexandria. He bid farewell to his mother, and asked her to care for the poor and the needy, then he went with the envoy. The Lord Christ appeared to him in a vision, encouraged him, and told him what would happen to him. When he arrived to the city of Alexandria, he stood before Armanius the governor, who deceitfully treated him well because he knew that he was the son of Basilidis the Chancellor. When Macarius did not change his counsel, the governor tortured him with all kinds of torture. While he was being tortured, his soul was taken up to heaven and he saw the habitations of the saints. Afterwards, the governor sent him to Nikios where he was tortured again. They cut off his tongue and arms and placed hot nails in his sides. God wrought many miracles on his hands. Among these was a procession, in which a dead man passed by him. The saint asked the Lord Christ to reveal His glory, and the man rose from the dead instantly. The man told the people around him of what he saw in Hades, and that Christ is the Lord of all. Many believed, and they were beheaded and received the crown of martyrdom.

It happened that Arianus the governor of Antinoe (Ansena) was present in Alexandria, who took the saint with him on his way back to Ansena. When he arrived in Shatanouf (Setnuf, Pshati), the ship stopped and they could not move it again. The governor ordered the soldiers to disembark the saint, where they cut-off his head. Thus, he finished his strife and received the crown of martyrdom.

When the righteous Emperor Constantine reigned, he sent the commander Eulogius with an order to open the churches, renovate the fallen ones, and to destroy the pagan temples. The Saint appeared to him in a vision and told him about the place of his body. He went to the place and brought out the body, built a church after his name, and placed the body in it. God performed many miracles through the body of St. Macarius.

May his prayers be with us, Amen. 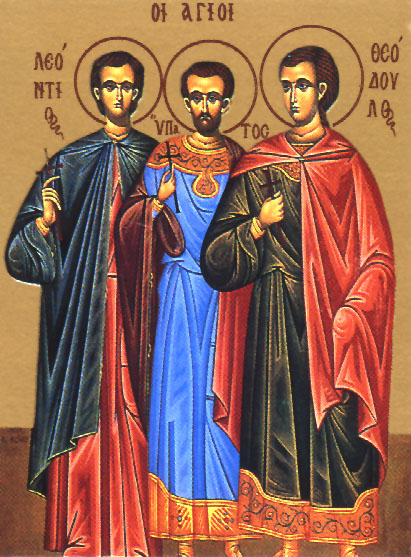 2. The Commemoration of the Martyrdom of St. Leontius of Tripoli (Lawendius).

Also on this day, St. Leontius of Tripoli (Lawendius), was martyred. He was born in Tripoli to Christian parents. He was handsome, perfect in his conduct, and gentle in his relationships. He read continuously the Holy Scriptures, especially the book of Psalms until he memorized it. When he enlisted in the army, he preached to his fellow soldiers, and demonstrated to them the corruption of idol worshipping. He advised them to refrain from its worship, some of them followed his advice while others were enticed by the devil and informed the commander that Leontius despised the idols, and was preaching that Christ was the true God.

The commander brought him to investigate the matter. The Saint answered the commander with the saying of St. Paul: "Who shall separate us from the love of Christ? Shall tribulation, or distress, or persecution, or famine, or nakedness, or peril or sword?" (Romans 8:35)

The commander became enraged, and he threw the saint in prison. The next day, he brought him back, and asked him, "With what power do you dare to disobey the Emperor, and to drive the people away from worshipping the gods?" The Saint answered, "Truly I desire that all people come to the obedience of Christ. You too will inherit the Eternal Kingdom, if you abandon your error, and worship Christ." The commander ordered him to be beaten until his blood poured out on the ground, while the saint was praising God and glorifying His name. One of the soldiers sympathized with him, and came close to him, saying, "I greatly sympathize with you, therefore I want you to sacrifice to the gods, so you will be pardoned." The Saint cried out at him saying, "Go away from me Satan." The commander increased his torture until he delivered up his pure spirit while he was in prison.

A rich believing woman came, gave money to the soldiers and to the prison guard, and took the body. She wrapped it in a golden shroud, and put him in a coffin inside her home, until the end of the time of persecution.

May his prayers be with us and Glory be to God forever, Amen.