Abib 5 : The Martyrdom of Sts. Peter and Paul, the Apostles. 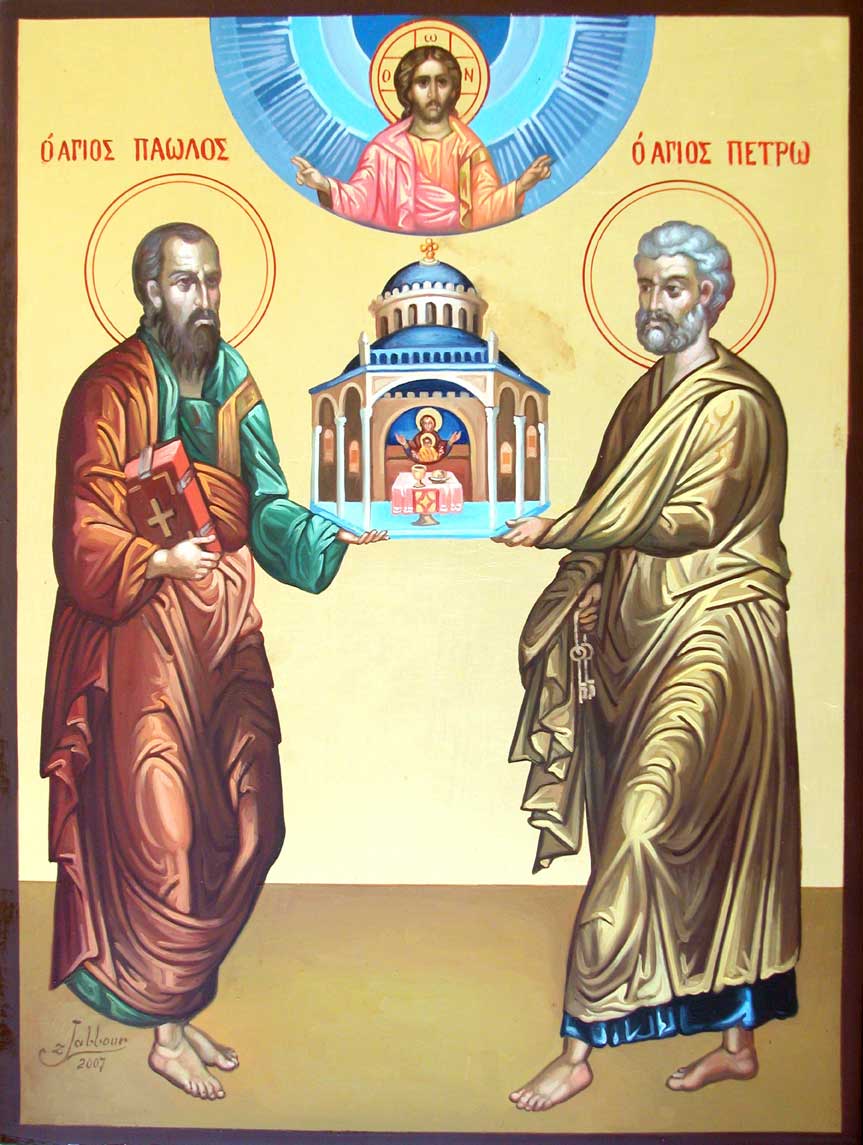 The Martyrdom of Sts. Peter and Paul, the Apostles.

On this day, the two great saints Peter and Paul, were martyred. Peter was from Bethsaida, and he was a fisherman. The Lord chose him on the second day of His baptism after He chose Andrew his brother. He had fervent faith and strong zeal. When the Lord asked His disciples: "Who do men say that I am?" So they answered, "Some say John the Baptist, some Elijah, and others Jeremiah or one of the prophets." ... Simon Peter answered and said, "You are the Christ, the Son of the living God." (Mat. 16:13-20) After he received the grace of the Holy Spirit, he went around in the world preaching of the crucified Christ, and he converted many to the faith. God wrought great and innumerable signs and wonders by his hands. He wrote two catholic Epistles to the believers. When he came to the city of Rome, he found there St. Paul the Apostle. Through their preaching, most of the people of Rome believed, so Nero seized Peter and commanded to crucify him. Peter asked them to crucify him head downwards, and he delivered up his soul into the hand of the Lord.

As of St. Paul the Apostle, he was born in Tarsus two years before the advent of the Savior. He was a Jew, of the tribe of Benjamin, a Pharisee, the son of a Pharisee. He was well learned in the Law of the Torah, and he was jealous for it. He persecuted the Christians.

When they stoned St. Stephen, Paul was guarding the clothes of those who were stoning him. He took from Caiaphas, the high priest, letters to the synagogues of Damascus, to bind the Christians and bring them to Jerusalem. As he journeyed, he came near Damascus, and suddenly a light shone around him from heaven. Then he fell to the ground, and heard a voice saying to him, "Saul, Saul, why are you persecuting Me?" And he said, "Who are You, Lord?" And the Lord said, "I am Jesus, whom you are persecuting. It is hard for you to kick against the goads." Then He ordered him to go to Ananias in Damascus, who baptized him, and he received his sight at once. He was filled by the grace of the Comforter, and he proclaimed boldly the Faith. He went around in the world preaching of the crucified Christ. He suffered much beatings, imprisonment, and was bound with fetters, some of which are mentioned in the book of the Acts of the Apostles and in his Epistles.

He went to Rome and proclaimed the Faith there and many believed by his hands. He wrote for them the Epistle to the Romans which was the first of his fourteen Epistles.

Finally, Nero seized him, tortured him severely and ordered his head cut off. While St. Paul was passing along with the executioner, he met a damsel who was a kinswoman of the Emperor Nero, and who had believed through him. She walked along with St. Paul, weeping, to where they carried out the sentence. He comforted her and asked her for her veil. He wrapped his head with the veil, and asked her to return back. The executioner cut off his head and left it wrapped in the veil of the young girl, and that was in the year 67 A.D. The young girl met the executioner on his way back to the Emperor, and asked him about Paul and he replied, "He is lying where I left him and his head is wrapped in your veil." She told him, "You are lying, for he and Peter had just passed by me, they were arrayed in the apparel of kings, and had crowns decorated with jewels on their heads, and they gave me my veil, and here it is." She showed it to the executioner, and to those who were with him. They marvelled, and believed on the Lord Christ.

God wrought by the hands of Peter and Paul many great signs and wonders, that they even carried the sick out into the streets ... that as Peter came by ... his shadow might fall on them ... and they were all healed. (Acts 5:15) The handkerchiefs or aprons were brought from Paul's body to the sick, and the diseases left them and the evil spirits went out of them. (Acts 19:12)