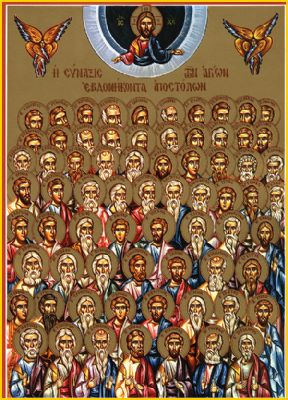 1. The Martyrdom of St. Aoulimpas, the Apostle.

On this day, St. Aoulimpas, who was called Paul, one of the seventy apostles, was martyred. This Apostle ministered to the disciples and carried the epistles of St. Peter to the Gentiles. He went with him to the city of Rome, preached there, taught and converted many to the Faith. When St. Peter was martyred, this Apostle was the one to take his body off the cross, shroud him, and take him to the house of one of the believers. Someone accused him, before the Emperor Nero, of being one of the disciples of Peter. Nero brought him and questioned him. The Saint confessed that the Lord Christ is the true God. Nero tortured him severely. Then he asked him, "How do you wish to die?" The Saint replied saying, "I only wish to die for the Name of Christ. Kill me any way you wish, and bring me speedily to my desire." Nero ordered to beat him and to crucify him, head downwards, like his teacher St. Peter. They did so and he received the crown of martyrdom.

2. The Martyrdom of St. Theodosia and her companions.

On this day also, St. Theodosia, mother of St. Proconius, along with two prefects and twelve other women, were martyred. When Theodosia heard that her son became Christian, and the Emperor had tortured him severely until he was close to death, she went to see him. She found them bringing him out of prison and all his wounds were healed. She and all those who were with her marvelled. They all cried saying, "We believe in the God of Proconius." The Emperor ordered their heads cut off and they received the crown of martyrdom.