Paona 26 : The Departure of the Great Prophet Joshua Son of Nun, and the Consecration of the Church of Archangel Gabriel. 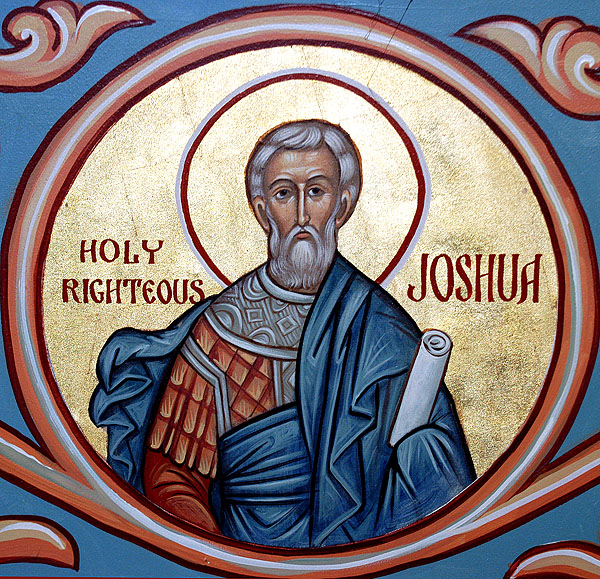 1. The Departure of the Great Prophet Joshua Son of Nun.

On this day, of the year 2570 of the world, the great prophet Joshua Son of Nun, departed. He was born, in the year 2460 of the world, in Egypt (Fifty three years before the deliverance of the people of Israel from the bondage of Pharaoh). He was a disciple and servant to Moses. Moses, after leading the people of Israel out of Egypt with the might of the Divine arm and the extraordinary wonders, brought them to the nearby mount of Sinai. He went up the mount taking with him Joshua, his minister, to receive the commandments. During the war of Israel against Am-a-lek, Joshua was the leader of the soldiers.

When Moses chose twelve men to spy out the promised land, one from each tribe, Joshua was one of them. He completed this mission with honesty. He and Caleb alone brought forth the true and accurate information about the promised land. Therefore they alone entered this land without the people of Israel that came out of the land of Egypt. Because they had murmured and doubted in the sincerity of the promises of God, God swore in His anger that they would not enter to His rest. Their children that they begot after their deliverance from Egypt, entered this land along with Joshua and Caleb.

After the death of the great prophet Moses in the year 2553 of the world, the LORD spoke to Joshua the son of Nun saying: "Moses My servant is dead. Now therefore, arise, go over this Jordan, you and all this people, to the land which I am giving to them; the children of Israel. Every place that the sole of your foot will tread upon I have given you, as I said to Moses. From the wilderness and this Lebanon as far as the great river, the River Euphrates, all the land of the Hittites, and to the Great Sea toward the going down of the sun, shall be your territory. No man shall be able to stand before you all the days of your life; as I was with Moses, so I will be with you. I will not leave you nor forsake you. Be strong and of good courage, for to this people you shall divide as an inheritance the land which I swore to their fathers to give them. Only be strong and very courageous, that you may observe to do according to all the law which Moses My servant commanded you; do not turn from it to the right hand or to the left, that you may prosper wherever you go. This Book of the Law shall not depart from your mouth, but you shall meditate in it day and night, that you may observe to do according to all that is written in it. For then you will make your way prosperous, and then you will have good success." (Joshua 1:1-8)

Joshua's heart was strengthened and he sent out two men to spy out the land secretly. So they went, and came to the house of a harlot named Rahab, and lodged there. The woman hid them; and they swore to spare her and all her household. Then she let them down by a rope through the window, for her house was on the city wall. (Joshua 2:1-15) Then Joshua opened (i.e. conquered) Jericho after he had gone around its walls several times and when they shouted with a great shout the great walls of the city fell down. The people went up into the city and killed both man and beast. The two men that had spied out the country, went into Rahab's house and brought her, her father, her mother, her brethren, and all that she had, out of the camp. Joshua spared their lives as the two spies promised her for she had spared their lives, and hid them. Then they burnt the city, and all that was therein. The gold, and the silver and vessels of brass and iron, were taken to the treasury of the house of the Lord.

The Lord was with this righteous man, so he opened many cities, killed many kings, and the nations feared him. Because of the great fear, the inhabitants of Gibeon worked craftily, and went and pretended to be ambassadors. And they took old sacks on their donkeys, old wineskins torn and mended, old and patched sandals on their feet, and old garments on themselves; and all the bread of their provision was dry and moldy. And they went to Joshua, and said to him, "We have come from a far country; now therefore, make a covenant with us." But the men of Israel said to them, "Perhaps you dwell among us; so how can we make a covenant with you?" They said to them, "From a very far country your servants have come, because of the name of the LORD your God; for we have heard of His fame ... this bread of ours we took hot for our provision from our houses on the day we departed to come to you. But now look, it is dry and moldy ... and these our garments and our sandals have become old because of the very long journey." Joshua made peace with them, and made a covenant with them to let them live; and the rulers of the congregation swore to them. Three days later, after they had made a covenant with them, they heard that they were their neighbors who dwelt near them. Joshua called for them, and he spoke to them, saying, "Why have you deceived us, saying, 'We are very far from you,' when you dwell near us? Now therefore, you are cursed, and none of you shall be freed from being slaves." Joshua made them woodcutters and water carriers for the congregation and for the house of the LORD. (Joshua 9:3-27)

Joshua fought with the five Amorite kings, hence the hand of the Lord had helped him by casting down great stones from heaven upon them. The children of Israel fought them before the city of Gibeon, and he made the sun stand still until the five kings and their soldiers were destroyed. Joshua divided the land according to the command of God among the children of Israel. He gave the priests cities to dwell in, and land for their cattle. He set apart five cities of refuge wherein all those who had committed a murder unintentionally might dwell.

When he completed about one hundred ten years and reached a good old age, he gathered together the elders of Israel, their heads, their judges and their officers, and commanded them to keep the commandment of the Law and not to deviate from worshipping God, then departed in peace.

2. The Consecration of the Church of Archangel Gabriel.

On this day also, is the commemoration of the consecration of a church in the name of the honorable angel Gabriel the announcer, on the Naklon mount, in El-Fayyoum.