The Departure of St. Thecla.

1. On this day, St. Thecla, who was contemporary to St. Paul the Apostle, departed. When St. Paul went forth from Antioch and came to the city of Nicomedia, there was a certain believer, whose name was Sefaros, took him to his house. Many gathered together to hear St. Paul's teaching. When this virgin Thecla heard St. Paul's teaching, she looked out from the window of her house so that she might hear more of his teachings. Her heart was pleased with his teachings, and she followed the apostle. Her father and her family were grieved and wanted to prevent her from following St. Paul to his meetings. When she did not heed their counsel, her father presented her situation to the governor, to prevent her from listening to St. Paul's teachings. The governor brought the apostle Paul, examined his teachings, and when he could find no cause for complaint against him, he shut him up in prison.

St. Thecla took off her expensive attire and ornaments, and came to St. Paul in prison, and bowed down at his feet. When her parents sought her, they could not find her. When they found out that she was with St. Paul in prison, the Governor ordered to burn her. Her mother cried out saying, "Burn her to be an example for the other women of noble families who believe in the teaching of the Apostle."

They threw her in the fire, which did not harm her. She escaped and came to St. Paul, then went to Antioch. There, a nobleman saw her, and was captivated with her beauty. He asked to marry her, but she refused saying, "I am the pride of Christ." He informed the governor of the city about her, who seized her and cast her to the lions, which did not harm her for two days. Then she came to where St. Paul was, he comforted her, strengthened her and commanded her to preach Christ in Iconium. She went there and preached the Faith of Christ, and then went to her own city and converted her father to the Faith of Christ. Having finished her fight, she departed in peace.

2. The Martyrdom of the Saint Abba Isaac.

This day also marks, the martyrdom of the Saint Abba Isaac, who was from Shama, district of Ashmoun. He worked as a gardener and overseer of an orchard. He was pious, gentle, and devoted to God. He did not eat meat or drink wine. He fasted two days at a time, then broke the fast with legumes. He visited the poor and the needy, and gave them what was left of his wages.

The angel of the Lord appeared to him in a vision and commanded him to go to the governor and confess the Name of Christ to receive the crown of martyrdom. Abba Isaac rejoiced, distributed all that he had, went to the governor, and confessed the Lord Christ. The governor tortured him much, but the Lord strengthened and healed him. Afterwards, the governor cut off his holy head and he received the crown of martyrdom. The people of his hometown came and took his pure body with great honor. The Lord wrought many great signs and wonders of his holy body. 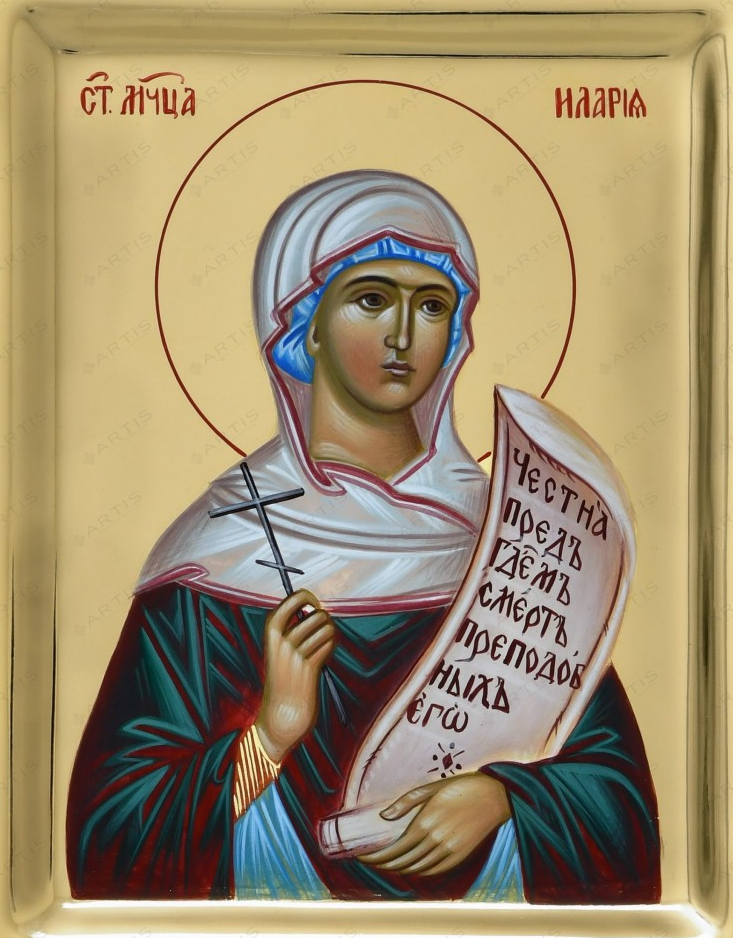 3. The Martyrdom of St. Hilaria.

On this day also, was the martyrdom of St. Hilaria (Liyarya). She was born in the city of Demliana which is near by the city of Demera, to pious Christian parents. She was chaste, and she fasted and prayed continually. When she was twelve years old, the angel of the Lord appeared to her while she was working and told her, "Why are you sitting here, and the strife is going on and the crown of martyrdom is prepared for you."

She gave all that she had to the poor and departed to Toah, and then to the city of Sarsana, district of El-Shouhada, Menoufiah. She located the governor and confessed the Lord Christ before him. He tortured her much. St. Shenousy was there. He comforted and strengthened her. The governor intensified his torture by making gashes in her body with an iron comb, and he drove red-hot iron pegs into her ears. Afterwards, he bound her along with seven thousand, six hundred martyrs, took them with him and departed. While they were on the ship, a crocodile jumped from the water and snatched away an only child from his mother, who wept and lamented for her son. This saint had compassion on her, and prayed to the Lord Christ. The crocodile returned the child alive and sound. When they came to Toah, the governor cast St. Hilaria (Liyarya) in the fire which did not harm her. Then they hacked off her members, cut off her head and cast them in the fire, thus she received the crown of martyrdom.

4. The Martyrdom of Sts. Thecla and Mouji.

This day also marks, the martyrdom of Sts. Thecla and Mouji (Mugi). They were born in the city of Kerakus, and they were brought up by a God-fearing woman, who was a teacher. Once when they were crossing the river they saw the governor torturing the Christians. They were amazed from his hard-heartedness. The angel of the Lord appeared to them, and showed them the glory of the saints. They went to Alexandria, where they confessed the Lord Christ before the governor, who tortured them severely. Then, he cut off the head of St. Mouji. As off St. Thecla, he sent her to the city of Demtaw, where she was martyred, after much torture. Thus they received the crown of martyrdom.

May there prayers be with us. Amen.

5. The Martyrdom of St. Antonius (Anthony) of Beba.

5. Today also, St. Antonius (Andona), was martyred. He was born in the city of Beba, to pious and merciful parents. When he heard about the torture of the martyrs, he went to Ansena, and confessed the Lord Christ before the governor. The governor ordered him shut to death with arrows. When no harm came upon him, he sent him bound with St. Abimachus and two other martyrs to Alexandria. The Governor shut up the three in prison and crucified St. Antonius head downwards but he was not harmed. When the governor became weary of torturing him, he sent him to the governor of Farma. There he found St. Mina in prison, and they rejoiced for their meeting. The governor of Farma tortured Antonius, at times by combing his body with iron combs, and at other times by casting him in a cauldron filled with boiling oil, but the Lord strengthened and healed him. Afterwards, they cut off his head and thus he received the crown of martyrdom.