Abib 29 : The Commemoration of the Translocation of the Relics of St. Andrew, the Apostle. The Martyrdom of St. Ouarshenoufa (Warshenofius).

On this day, the church commemorates the relocation of the relics of St. Andrew the apostle from Syria to Constantinople, at the order of the righteous Emperor Constantine. He built for his name a beautiful altar and consecrated it on this day. 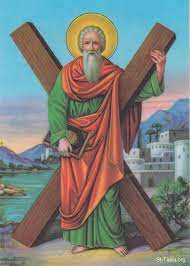 On this day also, St. Ouarshenoufa (Warshenofius) was martyred. He was well learned, righteous, and pious. When they asked him to become a bishop, he fled to the city of Tahmoun (Galgamoun, or Dalgamoun), and spent the night there with two God loving, Christian brothers. The Angel of the Lord appeared to him, and told him to go to the governor, and confess Christ before him. When he woke up, he told the two brothers about the vision. They all agreed to go together to go to the governor. They came to the governor, confessed the Name of Christ before him, and he tortured them severely. Then he took them with him to Sanhour where he continued to torture them. Then he took them to the city of Sa, gathered all the confessors and read to them the edict of the emperor to worship the idols. St. Ouarshenoufa jumped and took the emperor's edict and tore it to pieces. The governor was enraged and ordered him to be thrown in a fiery furnace and thus he received the crown of martyrdom.

May his prayers be with us, and Glory be to God forever, Amen.