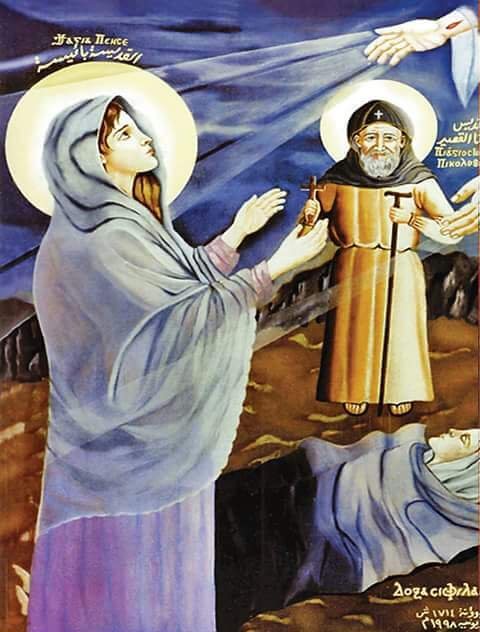 The Departure of St. Pa'esa (Athanasia).

On this day, St. Pa'esa, departed. She was born in Menouf, to pious and rich parents. When her parents died, she turned her house into a shelter for the poor and the sojourner. She accepted everyone that came to her fulfilling their every need until she ran out of money. Evil people gathered around her, and turned her mind to the ungodly way. She turned her home into a house of prostitution. When this news reached the elders of Shiheet, they sorrowed for her with great sorrow. The elders called upon St. John the short, and asked him to go to her, as an act of mercy, and to aid her in saving her soul, in turn for the good that she had done for them.

The saint obeyed the elders and asked them to support him with their prayers. When St. John came to where she lived, he asked her maid to announce his presence. When the maid informed her, Pa'esa adorned herself, and called him in. As he was walking, he was saying, "Even though I walk through the valley of the shadow of death, I fear no evil. For thou art with me." (Ps. 23:4) When he sat down, he looked to her and said, "Why did you belittle the Lord Christ, and do this evil deed?" She trembled, and her heart was melting from the words of the Saint who bent his head and started weeping. She asked him, "Why do you weep?" He answered, "Because I see the devils playing on your face, and therefore I weep for you." She asked him, "Is there any repentance for me?" He replied, "Yes, but not in this place." She said to him, "Take me wherever you wish."

Then he took her to one of the convents close by the wilderness of Shiheet. On their way it became dark. St. John told her to sleep in one place, while he slept far away from her. When he stood up to pray the midnight prayer, he saw a pillar of light coming down from heaven to earth, and the angels of God were carrying the Soul of Pa'esa. When he approached her, he found that she had departed. Then he knelt down and prayed fervently, with tears, asking God to reveal to him concerning her fate. He heard a voice saying, "Her repentance was accepted in the moment that she repented." After the saint had buried her, he returned to the Elders and told them what had happened. They all glorified the Lord who accepts the repentant and forgive their sins.

May her prayers be with us and Glory be to God forever. Amen.