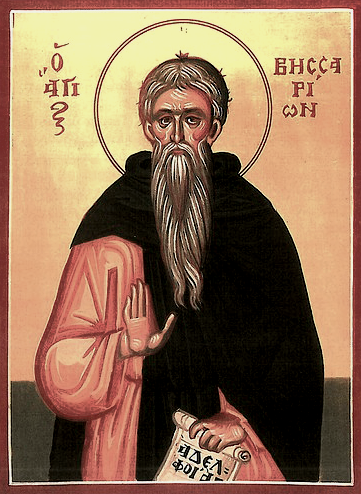 1. The Departure of St. Bessarion, the Great.

On this day, the great ascetic father, St. Bessarion, departed. He was born in Masr (Egypt) to Christian parents. When he grew up, he longed for the monastic life, so he went to Anba Anthony (Antonius), under whose direction he remained for a while. Then he went to Anba Macarius, and stayed under his guidance for a while. Later on, he wandered about in the desert, never lodging in a place with a roof. He possessed absolutely nothing of this world, and he had only one coarse hairy sack-cloth. He used to carry the Gospel, and went round the cells of the monks crying. If they asked him the reason for his weeping, he would reply, "My riches have all been stolen, and I have escaped from death. My family have fallen from honor into disgrace." His words referred to the great loss that befell the human race by the fall of the first father Adam by breaking the first commandment. Those who did not understand what his words meant would console him saying, "God shall restore what has been stolen from you."

The fathers had recorded for him many signs:

God wrought many signs on his hands. He pleased God and then departed in peace.

2. The Departure of St. Macarius III, 114th Pope of Alexandria.

He was born in the city of El-Mahalla El-Koubra, on February 18th, 1872 A.D., to an old, respectable family. His family was know by El-Kasees family (The family of the priest), which was virtuous and godly. He grew up from a young age in a religious and pious atmosphere. He received his primary and secondary education in El-Mahalla El-Koubra and Tanta. Even as a young man, he was ascetic, longed for solitary life, and enthusiastic about memorizing the church hymns. When he was sixteen years old, he deserted the world and went to the monastery of Anba Bishoy in Wadi El-Natroun, in the year 1888 A.D., to fulfill his desire for asceticism and worship. His name was Monk Abdel-Mesieh. He devoted himself to worship and to the study of the Holy Bible, ecclesiastical books, and Coptic rituals. In a short time his virtues and righteousness were evident, and his pure life became known to the monks. He was distinguished for transcribing books, and his Coptic and Arabic penmanship was exquisite. He perfected the religious Coptic artistic decorations. After he was ordained a priest he spent about six years in the pure ascetic life.

In the year 1895 A.D., Macarius went to the Baramous monastery, where he was ordained Archpriest (hegumen) by Pope Kyrillos V , and became his private secretary. The Pope delegated him to teach the Coptic and French languages in the theological school for monks. He intended to ordain him a bishop for Misr (Cairo), but two years after the arrival of Fr. Abdel-Meseih to Cairo, Anba Michael, bishop of Assiut, departed. A delegation from Assiut came to Cairo, they chose this honorable hegumen and nominated him to be a metropolitan for Assiut.

In the beginning, the Pope did not accept their petition, for he kept Macarius in order to ordain him a bishop for Cairo and as an assistant to His Holiness, in managing the affairs of the See of St. Mark. But when the delegation persisted in their demand, the Pope accepted their petition, and ordained Macarius a metropolitan for Assiut on July 11th, 1897 A.D. (Abib 5th, 1613 A.M.). He called him Macarius, and he was twenty-four years old. He went to his parish as a young man, with no armors but his piety, asceticism, and knowledge. He embarked, with the wisdom of the elders inspite of his young age, with his strong will, and with the help of the Lord, on bringing together the factions of his congregation, and establishing the Faith. So, he maintained the unity of his people, and the position and reverence of the church, and he was quite successful in it. He was not content with the program that he placed for the church reform, but he also held an immense Coptic conference in the city of Assiut in year 1910 A.D., inspite of all the objections that rose against it. He also submitted along with Anba Theophilus, then bishop of Manfalot and Abnoup, in early 1920 A.D., a petition to Pope Kyrillos V. This petition contained the required administrative and financial reforms, which indicated his great competence.

When Pope Kyrillos V, departed in 1928 A.D., the people nominated Abba Macarius for the Patriarchal chair to achieve the required reforms, but the circumstances then prevented that. When Pope Yoannis IXX, departed, the Divine grace permitted that Anba Macarius be enthroned on the throne of St. Mark. He was ordained Patriarch for the See of St. Mark on Sunday, February 19th, 1944 A.D.

After his enthronement to the Patriarchal chair, Anba Macarius issued on February 22nd, 1944 A.D., a historical document. Its main objective was to reform the monasteries, and promote their monks spiritually, and scientifically. He also ordered that the heads and the administrators of the monasteries be accountable. This lead to a major contention between the Holy Synod and the General Coptic Community Council (Maglis El-Milli).

On June 7th, 1944 A.D., the Holy Synod submitted a memorandum to the Pope and to the minister of Justice. They objected to the draft of the Marital and Personal Law for the non-Muslim denominations, for it subverted a canon of the Coptic Orthodox Church, as it affected two of the Holy Sacraments of the church which are the sacrament of Priesthood and Matrimony. These sacraments are cornerstone of the Christian religion and worship.

The dispute between the Synod and the Council continued, and all the attempts of reconciliation failed. The efforts of the Pope to eliminate the misunderstanding failed also. The council insisted on interfering in what was not its jurisdiction, and in what was the core jurisdiction of the Holy Synod. As a result, the Pope was compelled to leave the Capital, and the Papal residence, for seclusion in Helwan, then went to the Eastern monasteries accompanied by the metropolitans. He remained for a while in St. Antony's monastery then went to the monastery of Anba Paul. All these painful events had strong impact in all the circles and distressed every devout in the church.

When the Prime Minister knew about the departure of the Pope to the monastery, he worked on the return of the Pope in honor to his Chair, and his efforts were successful. Meanwhile, the Coptic Community Council (Maglis El-Milli) sent a letter to the Pope asking for his return, to be able to manage the affairs of the church, and promised the cooperation in the needed reforms. Later, the Pope returned from the monastery, and the people received him with joy and reverence.

The Holy Synod convened, with Anba Macarius presiding, on January 1st, 1945, and issued many resolutions, which follow:

On June 6th, 1945 A.D., the Russian Patriarch visited Cairo. Pope Macarius sent a delegation of metropolitans and bishops to be in his reception. Then they exchanged the cordial visits.

Once again a dispute between H.H. the Pope and the General Coptic Community Council (Maglis El-Milli) took place. This time the dispute was not resolved before the Pope took the initiative to defend the position and dignity of his nation, the canons of the churches, and the Family Marital Law for non-Muslims in particular. On May 30th, 1945 A.D. all the leaders of the non-Muslim denominations in Egypt, headed by the Patriarch of the Coptic Orthodox Church, presented a memorandum to the minister of Justice objecting to the special law that regulated the denominational family affairs courts. Also copies were sent to the senate and the house of representatives. The memorandum focused on the objections, to better suit the Christian rites and traditions.

The Pope suffered from a severe weakness two weeks before his departure that forced him to rest in his residence. On Thursday evening, the 24th of Misra, 1661 A.M. (August 30th, 1945 A.D.), he felt fatigued and he suffered from heart failure. The doctors rushed to his bedside trying to save him till dawn. At 9:15 Friday morning, 31st of August, 1945 A.D., his pure soul departed to its creator. On Sunday, the second of September, his pure body was taken to its final resting place in the church with the signs of grief and sorrow. His coffin was placed beside the bodies of the patriarchs, his predecessors. He remained on the Patriarchal throne for one year, six months, and nineteen days. May God accept him in the habitations of the righteous.

Coincidentally, an earthquake was felt in Cairo at 2:45pm at the time of his burial. Everyone felt it, and the believers were touched, for nature shared their sorrow for the departure of this pure saint.