Mesra 3 : The Relocation of the Body of St. Simon (Simeon) the Stylite to the city of Antioch, and the Departure of Pope Abriamus (Primus), Fifth Patriarch of Alexandria. 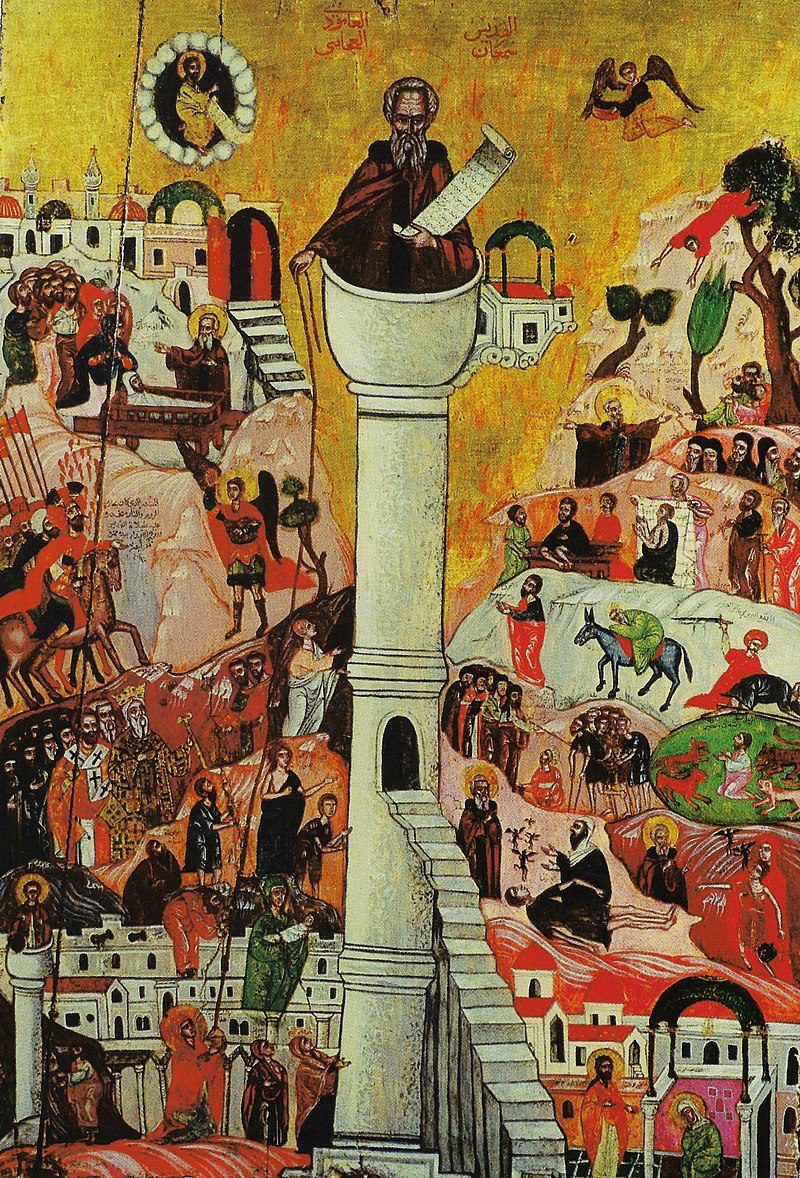 1. The Relocation of the Body of St. Simon (Simeon) the Stylites to the city of Antioch.

On this day, St. Simeon (Simon) the Stylites, departed. He was from Syria and he had shepherded his father's flocks since he was young. He regularly attended the church. The Grace of God moved him and he came to one of the monasteries, where he stayed and worshiped God in great asceticism. He exerted himself with much fasting and excessive thirst. Then he tied a rope around his loins until it pierced his flesh, and a repulsive smell came out of him. When the other monks were offended by his smell, he left the monastery and came to a pit where he dwelt for a short time. The abbot of the monastery saw in a vision, as someone was telling him, "Why did you send away My servant Simon? Seek him, and bring him back," as if the voice was rebuking them for his dismissal from the monastery. The abbot informed the brethren of this vision and they became troubled and they began to look for St. Simeon until they found him in the pit, without food or water. They confessed to him their transgression, asked for his forgiveness, and brought him back to the monastery. When they started to exalt him, he felt that he was unworthy, so he left the monastery secretly, and came to a certain rock, where he lived for sixty days without sleeping. Afterwards, the Angel of the Lord came to him, comforted him, and told him that God had called him for the salvation of many souls. Then he dwelt over a pillar, thirty cubits in height, for fifteen years. He performed many signs and great wonders, and preached to all those who came to him.

His father sought him, but did not find him and he died without seeing him. His mother, after a long time, found out about him, so she came to him where he was staying on that pillar. There she wept greatly, then she slept under that pillar. The Saint asked the Lord Christ to have mercy on her. His mother died while she was sleeping, and they buried her under the pillar.

Satan became envious of the saint for all his good deeds, and moved against him. He smote him in one of his legs with ulcerations which forced him to use the other leg for many years, until the diseased leg rotted, and worms dropped from it under the pillar. A chief of a band of thieves came to him and slept under his pillar. The Saint prayed to Christ on his behalf, and he stayed for a few days, and died. The Saint asked Christ to supply him with water, and a spring of water sprang up at the foot of the pillar. Then he moved to a taller pillar, where he stayed on top for thirty years. After he completed forty-eight years in worshipping, he departed to the Lord. He preached many people, taught them, and brought many back to the knowledge of Christ.

When the patriarch of Antioch heard about his departure from this world, he came to him and took his body to Antioch in great veneration.

2. The Departure of Pope Abriamus (Primus), Fifth Patriarch of Alexandria.

On this day also, in the year 116 A.D., Pope Aprimos (Primus), Fifth Patriarch of Alexandria, departed. He was baptized by St. Mark the Apostle. He was one of the three who were ordained priests by St. Mark the Apostle, along with Bishop Anianus, the Second Patriarch. Pope Aprimos was ascetic, pious, and filled with good deeds. He was ordained to the apostolic chair on the 22nd day of Baounah (June 16th, 16 A.D.). During his papacy, the church was in peace and tranquility.