Tout 10 : The Martyrdom of Saint Matruna, and the Commemoration of Sts. Basin and Her Children. 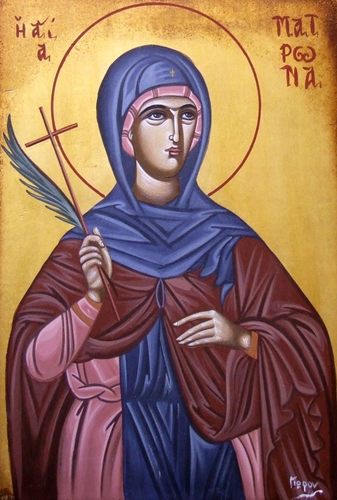 1. The Martyrdom of Saint Matruna.

On this day St. Matruna, who was a maid-servant to a Jewish lady, was martyred. She was of Christian parents, and her mistress used to entice her to adopt the Hebrew religion, but she refused. Therefore her mistress used to humiliate her, ill treat her, and over-burden her with servitude.

One day she accompanied her mistress to the Jewish temple, then she went to the Christians church. And when her mistress asked her where she had been and why she did not enter their assembly, the Saint replied, "God had departed far from the synagogue that is yours, how shall I enter it? Whereas the place that should be entered is the church which the Lord Christ has bought with His blood." Her mistress became angry at this and beat her harshly, then imprisoned her in a dark place where she spent four days without food or drink. She then took her out and beat her painfully, then she returned her to her imprisonment where she died.

After her death, her mistress, because she feared that the authorities would hold her accountable for her blood, took St. Matruna to the top of her house and threw her down so that it would be said that she had fallen by accident. She was accursed by God, her feet slipped and she fell down, died and went to Hell. As for the Saint, she went to the eternal bliss.

Her intercession be for us. Amen.

2. The Commemoration of Sts. Basin and Her Children.

On this day also is the commemoration of St. Basin and her three children.

Their prayers be with us, and Glory be to our God forever. Amen.