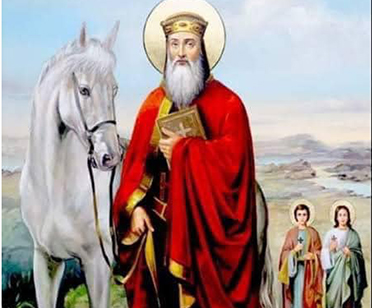 The Martyrdom of Saint Basilides (Wasilides)

On this day, St. Basilides (Wasilides) who was a minister and counsellor for the Roman Empire, was martyred. He had many slaves and servants. Emperor Numerianus was the ruler, who was married to Basilides' sister, Patricia, and had a son called Yustus. Patricia was also the mother of Theodore El-Mishreke. Basilides had two sons: Awsabyos (Eusebyus) and Macarius.

When the Persians waged war against Rome, Emperor Numerianus sent to them his son Yustus and Awsabyos, Basilides' son. Then he went to fight another enemy and was killed in that war. His kingdom was thus left vacant without a ruler.

The people chose from among the soldiers a man called Agrippita, who was a shepherd, and they set him over the royal horses, stable. He was a mighty man in action, bold in his dealings. One of the emperor's daughters looked at him and took him as her husband. She made him emperor and called him, "Diocletian." Shortly after, he forsook the Lord God of Heaven and worshipped idols. When Wasilides heard this, he was sorrowful, and he did not return to the service of the new Emperor.

Meanwhile, Yustus, the son of Numerianus, and Awsabyos (Eusebius), the son of Basilides, returned from the war with triumphant victory. When they saw that the Emperor had renounced the faith, they were exceedingly sorry and drew their swords and wanted to slay Diocletian, the infidel Emperor, and to return the kingdom to its rightful owner Yustus, Numerianus' son. But Basilides prevented them from doing this. Then he gathered his army and slaves and informed them that he wished to lay down his life for the sake of Christ's Name. They all answered saying, "We also will die with you." They stood before Diocletian who feared them tremendously, for they were the rightful owners of the kingdom. So Romanus, Victor's father, advised him to banish them to Egypt to be tortured there. Diocletian sent them each to a different province: Abadir (Apater) and Eraee (Herai) his sister, Awsabyos (Eusebius), Macarius, Claudius, and Victor. Theodore El-Mishreke was nailed to a tree.

He sent Basilides to Masrus, the governor of the Five Western Cities (Pentapolis). When Masrus saw him, he wondered why he had left his kingdom and his glory. Our Lord Christ sent His Angel and lifted Basilides up by the Holy Spirit to heaven, and showed him the spiritual dwellings, and his soul was comforted. As for his slaves, some were set free and some were martyred with him. St. Basilides endured severe tortures, on a squeezing machine (Hinbazeen) at times and at others his body was combed with iron combs. He was lifted onto a spiral device with a saw then thrusted him on a red hot iron bed. Masrus, the governor, did not leave out any means of torturing him. When he saw that Basilides remained steadfast in his faith, Masrus ordered to cut off Basilides holy head, thus he received the crown of martyrdom in the kingdom of heaven in return for the earthly kingdom which he had forsaken.