Baba 9 : The Departure of St. Eumenius, the Seventh Pope of the See of St. Mark, the Eclipse of the Sun in the Year 958 A.M., and the Commemoration of St. Simon (Simeon) the Bishop.

1. The Departure of St. Eumenius, the Seventh Pope of the See of St. Mark.

On this day of the year 146 A.D., Saint Eumenius the seventh Pope of the See of St. Mark, departed. Pope Abremius, the fifth Pope, ordained him a deacon and he served 10 years in this position. When St. Yustus, the sixth Pope, was appointed, he saw how Eumenius excelled in knowledge and faith, so he ordained him a priest. He entrusted to him the teaching of the believers of the church of Alexandria, and asked him to look after them and to instruct them in the principles of the Orthodox faith.

When Pope Yustus departed, this father was chosen Patriarch. He handed down the care of the churches and the teaching of the believers to Father Marcianus who later became his successor. He continually restored the strayed sinners, explaining to the pagans plainly the Divinity of our Lord Jesus Christ and His being one in His divine essence. He stayed on the chair for 13 years and departed in peace. 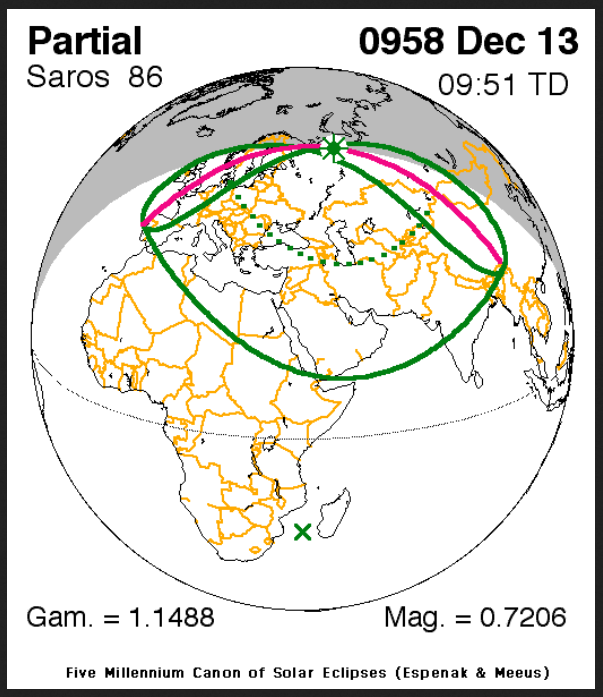 On this day also, in the year 958 A.M., during the reign of King El-Saleh Ayoub and the papacy of the father the Patriarch Abba Kyrillos III, 75th Pope of the See of St. Mark, a stupendous thing happened in the world which amazed those who beheld it or heard of it. The sun became gradually dark until darkness spread everywhere and the stars were seen in the daytime.

People lit lamps and were struck with great fear. They cried out to God the Almighty with all their hearts, asking for His compassion and mercy. The Lord had mercy upon them, removed their fear and the darkness was lifted all at once and the sun appeared to light up the world, and the lamps were extinguished. That occurred from 8:30 a.m. to 9:30 a.m. The people glorified God who was long suffering towards them and did not deal with them according to their sins but according to His mercy and patience.

To Him is the Glory in His church. Amen.

3. The Commemoration of St. Simon (Simeon) the Bishop.

On this day also is the commemoration of Saint Simon the Bishop.